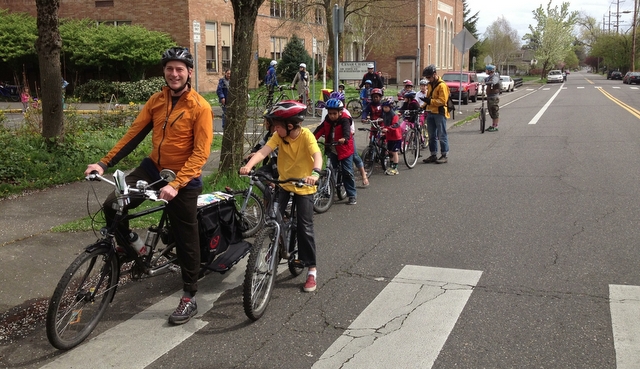 Even with the looming rain clouds, families from across Portland came out to Cesar Chavez School to celebrate walking and biking to school this past weekend. Families enjoyed an array of activities, including a bike skills rodeo, trainings on how to fix a flat tire and how to lead a walking school bus, great food and much more. In addition, the Spring Kick-off offered free basic bike repair which resulted in 18 bikes rolling away with smiling cyclists ready to ride to school!

Safe Routes to School staff were excited to welcome all families and especially thankful to Cesar Chavez staff and volunteers that helped with the Safe Routes Spring Kick-off.

For more information on other upcoming Safe Routes to School events and programs, please visit the website.

The Portland Bureau of Transportation and Portland Police Bureau sent a notice to the general public today that a crosswalk enforcement action is scheduled for Friday, April 19, to raise awareness of pedestrian safety and traffic law.

The enforcement action will be during the morning commute, from 7:30 to 9 a.m., at the marked crossing of NE Martin Luther King Jr. Boulevard at NE Jarrett Street.

A crosswalk enforcement action includes a pedestrian decoy positioned at marked or unmarked crosswalks. Drivers who fail to stop for pedestrians in the crosswalk and pedestrians who jaywalk may be issued a warning or citation by the Portland Police Bureau.

Crosswalk enforcement actions are an effective way to communicate pedestrian right of way laws to both drivers and pedestrians. The transportation and police bureaus do enforcement actions in response to community requests and to educate the general public on the rules at marked and unmarked crossings. They are conducted approximately once a month.

(PORTLAND, Ore.) – The City of Portland Bureau of Transportation advises the traveling public that street improvements on NE Glisan Street will require a road closure on NE 24th Avenue between NE Glisan Street and NE Sandy Boulevard beginning 7 a.m. on Monday, April 29, through 5 p.m. on Friday, May 10, all hours and all days. The public is advised to expect delays on NE Glisan Street between NE 22nd Avenue and NE 26th Avenue while repairs are made.  The public is also advised to travel cautiously, observe all lane closures and directions by flaggers, and use alternate routes if possible.

This closure is necessary to remove and replace both the base and the surface layers of sections of NE Glisan Street to stabilize the foundation of the road and prevent potholes and other surface distress.

Local access to residences and businesses will be provided.

(PORTLAND, Ore.) – The City of Portland Bureau of Transportation advises the traveling public that street improvements will require lane closures on NE 28th Avenue between East Burnside Street and NE Glisan Street beginning Friday, April 19, through Wednesday, April 24, from 7 a.m. to 4 p.m. weekdays. The public is advised to expect delays, travel cautiously, observe all lane closures and directions by flaggers, and use alternate routes if possible.

The lane closures are necessary to grind down the existing pavement and repave 0.73 lane miles of the street.

Last chance to weigh in on NE Glisan (60th to 82nd) and SE Division (60th to 80th) safety projects and a great opportunity to learn about the High Crash Corridor program from City staff and neighborhood participants.

On Thursday, April 18, 2013, 12:00 PM to 1:00 PM at City Hall,1221 SW 4th Ave, 2nd Floor - Lovejoy Room, the City of Portland Bureau of Transportation (PBOT) invites you to hear about PBOT's citywide safety initiative. Presenters will talk about SE Division St. from 60th to 80th Avenues to illustrate how collaboration with neighbors and low-cost improvements can increase safety for people in cars, on foot, and on bikes.

You can learn more about PBOT’s High Crash Corridor program and the SE Division project on the website.  Below is more information on the NE Glisan safety project.

On February 25th, 2013 the Bureau of Transportation led a public meeting with the support of the Portland Police to discuss potential safety improvements on NE Glisan. Everyone who had contacted the City regarding the January 2013 crash was invited. The meeting was well attended. Those present expressed significant concern about safety on NE Glisan, including concerns about speeding and the safety of pedestrians crossing the street. Many voiced specific concerns regarding the crossing at 78th. You can view the Transportation Bureau’s presentation at this meeting online.

On April 22, 2013 there will be a second public meeting to discuss strategies to improve safety on NE Glisan between NE 60th and 82nd Avenues. Staff from the Bureau of Transportation will share data about traffic flow, parking demand, and pedestrian travel in the corridor at the meeting. In addition, Transportation staff will present specific safety strategies for public feedback.

You are invited to attend this meeting. More detailed information will be available there.