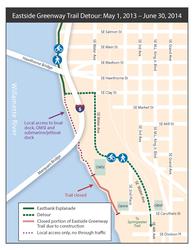 The Eastside Greenway pedestrian and cyclist trail is closed between the Oregon Museum of Science and Industry (OMSI) submarine/jetboat dock and SE Caruthers Street until June 30, 2014 to allow for construction of the Portland-Milwaukie Light Rail Bridge over the Willamette River.

A safe detour route has been established along SE Water between Caruthers and Clay Streets. The detour features new pavement and sidewalks, wider vehicular lanes, striped bike lanes and one left turn bike box at Clay Street. Additionally, the City of Portland will flip-flop the stop signs at SE Water and SE Caruthers. North/south traffic will be able to pass through the intersection without stopping, while east/west traffic will now observe a two-way stop.

The detour will connect directly to SE 4th Avenue and the Springwater Corridor Trail to the south. Cyclists, walkers and runners will access the Eastside Greenway Trail at SE Clay Street to the north.

Local access to OMSI, the submarine and the boat docks will be maintained via the existing path, however no through traffic will be allowed. Way-finding signs will be placed at the closure points to direct path users.

This closure will allow for crews to construct the landside piers and abutment for the bridge. Crews will also reconstruct this portion of Eastside Greenway Trail during this closure.

There are many vantage points where the public can still safely watch the bridge construction. The small plaza, located at the Caruthers cul-de-sac and the waterfront, will be open, with the exception of occasional spot closures depending on work needs. The plaza near the OMSI submarine/jetboat dock will also be open for viewing. Bridge cams of live bridge construction can be viewed by going to www.trimet.org/pm/construction/bridgecams

Questions or concerns from the public about this work should be directed to DeeAnn Sandberg, TriMet Community Affairs Representative. Desk: 503-962-2273 Email: sandberd@trimet.org.

About the Portland-Milwaukie Light Rail Bridge

The light rail bridge is the first bridge built across theWillamette River in Portland in more than 40 years, and will be the first cable-stayed bridge for the region, extending 1,720 feet (0.326 miles) over the Willamette River.

The Portland Bureau of Transportation advised the traveling public today that drainage work will require lane closures on NW Cornell Road in the West Hills near the Audubon Society of Portland. Work begins Thursday, May 2, at 7 a.m. and lasts until 3 p.m. Lane closures will occur again during the same hours on Friday, May 3; Monday, May 6; and Tuesday, May 7.

One traffic lane will remain open at all times. The public is advised to use alternate routes if possible. Expect delays, travel cautiously and follow directions from flaggers.

With an impressive span of sunny days ahead, yesterday kicked off National Bike Month. 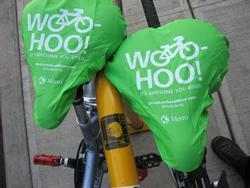 The Portland Bureau of Transportation is hosting dozens of events to celebrate those already riding and to encourage everyone else to dust off their bikes and enjoy the spring weather. A full list of breakfasts and a calendar of all the month’s events can be found on the PDX Bike Month website.

PBOT’s Safe Routes to School program kicked off the season with the first of eight bike breakfasts.  At today’s event, held near Gilberts Heights Elementary School,  staff greeted and fed students, parents and commuters on their way to school, work and errands.  Since May is also Walk + Bike to School Challenge Month many families arrived on foot.

If you would like to learn more about benefits of and tools for encouraging bike commuting at the workplace, Regence is holding the second annual Portland Employers Bike Summit on National Bike to Work Day, Friday May 17, 1:00 – 4:00 p.m. at 100 SW Market. Nearly 50 people have already RSVP’d for the event.

And if you’re interested but not sure you’re ready to use your bike for transportation, come to the Cycling Essentials class on Thursday, May 9th at PSU’s Bike Hub at 6:30 pm.  It’s free and offers a wealth of information to help you become a confident and comfortable rider.

PORTLAND, Ore. – The City of Portland Bureau of Transportation advises the traveling public that street improvements will require lane closures on southbound NE 33rd Drive between NE Argyle Street and also on NE Columbia Boulevard beginning 5:30 a.m. on Thursday, May 9, through noon Friday, May 10.

The public is advised to expect delays on both NE 33rd Drive and NE Columbia Boulevard. The public is also advised to travel cautiously, observe all lane closures and directions by flaggers, and use alternate routes if possible.

Motorists traveling on southbound 33rd Drive will be detoured onto NE Argyle Street to NE 21st Avenue. From there, drivers can access eastbound and westbound NE Columbia Boulevard.

City crews will cover the concrete road surface with an epoxy overlay to protect the road surface and improve traction. The finished product is expected to look and feel like the westbound lanes the Transportation Bureau resurfaced in 2012.

PORTLAND, Ore. – The Portland Bureau of Transportation advises the traveling public that drainage work that has required lane closures on NW Cornell Road since May 2 will continue through Friday, May 10. The work had been expected to be complete by Tuesday, May 7.

One traffic lane on the two-lane road will remain open at all times, with flaggers directing motorists. The public is advised to use alternate routes if possible. Expect delays, travel cautiously and follow directions from flaggers.