At least one traffic lane in each direction will remain open at all times. Local access to residences and businesses will be provided.

The lane closures are necessary to allow crews to grind down  .33 lane miles of worn pavement in preparation for paving. 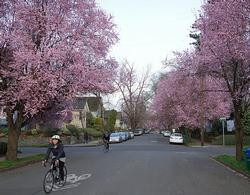 The Portland Bureau of Transportation will hold three open houses on the proposed 20’s Bikeway Project.

This project will plan, design and construct safety improvements to this important 9.1 mile north-south bicycle route.  The route uses a variety of local residential streets and neighborhood collector streets between NE/SE 26th and 29th Aves, and runs from NE Lombard St at the north end of the City to connect to the Springwater Corridor at the south end of the City.  The project is funded through a $2.4 million federal grant.

These open houses will allow for public comment on the design options developed to date by staff and the Stakeholder Advisory Committee.  If you can’t make the March 13 open house, the same material will be presented at open houses in SE Portland on March 17 at Cleveland High School and March 18 at Central Catholic High School.

For more information on the project, including draft maps, documents and Stakeholder Advisory Committee notes, see the project webpage: http://www.portlandoregon.gov/transportation/62816

Whether driving or walking, learn to recognize "the double threat"

Walking is a great way to get exercise and Portland is a great city for walking. It’s still important, however, to follow some basic safety rules to protect yourself from cars and other potential hazards.

In Portland, every intersection is a crosswalk whether marked with paint or not – this includes “T” intersections. By Oregon law, motorists must stop for pedestrians showing intent to cross by extending part of their body, wheelchair, cane, crutch or bicycle into the roadway. But safety doesn’t end there.

Road users should keep in mind that a secondary, or “double” threat exists on streets with two or more lanes of traffic traveling in the same direction.

Drivers: Oregon law requires drivers to slow down and then stop when they see a vehicle stopped in an adjacent lane, regardless of whether a pedestrian is visible. It is illegal for a vehicle to pass a stopped vehicle at a crosswalk (ORS 811.020).  * If you see a vehicle stopped, assume you need to stop too. *

Pedestrians: In this situation, you might be blocked from the view of other approaching motorists by a stopped vehicle. Before entering the next lane of traffic, stop and look to make sure all approaching vehicles have stopped for you before you cross the next lane.

Find more information about safety on our roads on our StreetSmart Safety page - click here to visit.

(March 4, 2014)  – The City of Portland Bureau of Transportation advises the traveling public that street improvements will require intermittent lane closures on NE Broadway at NE 24th Avenue in the coming months as the existing traffic signal is rebuilt and pedestrian improvements constructed.

Pedestrian crossings will be maintained throughout the work schedule as contractors and city crews complete the traffic signal reconstruction. Construction largely will be limited to 9 a.m. to 3 p.m. to minimize disruptions to travelers.  Some weekend work may occur.

At least one traffic lane in each direction will remain open at all times. Local access to residences and businesses will be provided.  Travelers are asked to observe instructions by flaggers and signage.  The public is advised to expect some delays while the project is under construction

This project will provide more direct pedestrian crossings by removing a pedestrian island and installing curb extensions on 24th Avenue.  The traffic signal, one of the oldest in the city, is being rebuilt to improve its reliability.

(March 5, 2014) - The early February storm that coated Portland in snow and ice for five days will lead to an estimated $740,000 in extra costs to the Portland Bureau of Transportation for storm response and cleanup, according to figures released today.

Crews worked 24 hours a day in 12-hour shifts during the storm and the overtime for that response accounted for the majority of the additional costs, or about $560,000.   Materials and repairs accounted for the remainder.

The bureau’s $500,000 winter storm contingency budget will cover most of those costs, and managers will strive to identify savings and efficiencies within the bureau’s operational budget to cover the rest.

“This winter’s storm brought out the worst in terms of travel and safety impacts and the best in terms of city crews’ response, which was to immediately turn to a 24-hour-a-day schedule to clear streets of snow and address the hazards of ice,” said PBOT  Executive Director of Finance and Business Operations Alissa Mahar. “Now our job is to work hard to create savings where possible to cover the additional storm costs.”

Bureau managers will have until the end of the fiscal year on June 30, 2014 to identify savings to cover those additional expenses.

While the storm is over, gravel cleanup continues. The majority of those costs are covered by the bureau’s base operations budget and overtime costs have been accounted for in the estimate released today. Crews also treated city streets with deicer on the days leading up to the storm, a service that was covered under the base operating budget.