(January 9, 2015) - The Portland Bureau of Transportation advises the traveling public that tower crane work will close NE Multnomah St between NE 7th Ave and NE 9th Ave beginning at 6 pm tonight and extending through Sunday.   The street will reopen before Monday’s commute.

Bicycle traffic should follow the same detours as vehicle traffic.

Pedestrian traffic should follow the existing construction detours. Local access to businesses and residences will be maintained.

The closure is necessary for the contractor constructing the Hassalo on Eighth project to dismantle the tower crane on the south side of Multnomah Street.  A second weekend closure will occur in February to take down a second tower crane.

Check these resources when winter tests your resolve 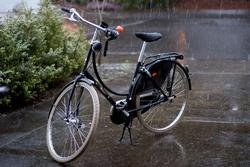 (January 13, 2015) It’s a couple of weeks into the New Year - are you having a hard time remembering your resolutions?  Maybe you resolved to ride more, in order to stay fit or be more active throughout the year. But good habits can take some getting used to. Luckily there are lots of resources to help you to get out and about in the rain and cold weather. For example:

Our website has lots of helpful tips on riding in the dark and rain.

If you’re on a budget and need ideas for economical winter gear, check out this classic article from BikePortland.org.

If money is no object, take a look at the stylish offerings highlighted by Momentum Magazine.

And if a little extra motivation would help, read ORbike’s 5 Tips to help you stay on the bike.

Even if you didn’t make it a New Year’s resolution, riding your bike is a great way to stay fit, save money and enjoy the outdoors year ‘round.

(January 15, 2015)  – The City of Portland Bureau of Transportation advises the traveling public that street improvements will require lane closures on SE 7th Avenue from SE Belmont Street to SE Stark Street from Friday, January 16 through Tuesday, January 20, 7 a.m. through 5 p.m. each weekday. This project may also include some weekend work.

The lane closures will allow crews to grind .83 lane miles of pavement in preparation for paving at a later date.

PBOT street improvement crews work through the winter, adjusting tasks based on weather conditions. Crews will grind down old asphalt and prepare street surfaces for paving even in cold and rainy conditions. They will return to complete paving during a window of dry weather.

This work is weather-dependent and the schedule may change

PORTLAND, OR – Portland Mayor Charlie Hales and Transportation Commissioner Steve Novick today temporarily halted the paperwork necessary to take an advisory vote to the May ballot, regarding options to pay for city street maintenance and safety.

“Today, I am announcing a pause in our local efforts to fund our streets and safety projects within the City of Portland,” Mayor Hales said. “Over the past week, I have had conversations with Speaker of the House Tina Kotek and with Gov. John Kitzhaber. They have each assured me that a statewide transportation package is a top priority for them this legislative session.”

The Legislature is set to convene in February. The deadline for Portland to submit paperwork for the May election was 5 p.m. today.

“Because they recognize the importance of efforts to fund transportation infrastructure, they will hear the needs of local governments and ensure they are part of state transportation conversations as they work to give communities the tools to build and maintain critical infrastructure,” Hales said.

“We are pleased to know that the Legislature is very interested in a transportation funding discussion this year,” Commissioner Novick said. “We have said all along that the street fund we have proposed will not address all our needs, and that we are counting on the state and federal governments to step up.”

The city has conducted more than 14 months of hearings to craft a proposal to pay for street maintenance and safety.

“During the passionate conversations we have had in Portland regarding transportation funding, many options were discussed, none of which prove to be popular,” Hales said. 2

“Some options were put forward by Portlanders that we do not have the authority to enact. As your mayor, I will go to Salem to seek that authority.”

Hales said he also will enlist the aid of mayors throughout Oregon to push for more authority for cities. “Together, we can represent the needs of cities, all of which will benefit from new options to fund infrastructure at a time when the existing options don’t satisfy our communities,” he said.

“The completion of this work comes when all three levels of government have acted; when Congress, the Legislature and the Portland City Council have all authorized new revenues to pay for streets and roads,” Hales said. “This cooperation between the State of Oregon and local governments gives us, as Oregonians, the best way forward toward that objective.”

Portland's signature events help you improve your home, your bike, your finances and more!

(January 16, 2015)  It’s not too late to attend a Fix-It Fair! Two more fairs will take place from 9:30am to 3:00pm on Saturday, January 24 at Rosa Parks Elementary School and Saturday, February 21 at David Douglas High School. You can view the brochure for the January 2015 Fix-It Fair here. 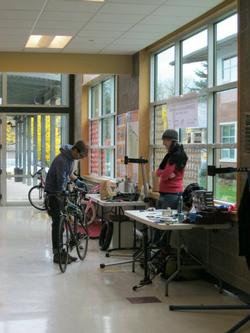 Fix-It Fairs are FREE City of Portland events where you can learn simple ways to save money and connect with local resources. Join your neighbors and talk to the experts on topics such as water and energy, health, food and nutrition, community resources, recycling, yard care and even active transportation! You can also take advantage of more than 25 workshops offered hourly and free on-site childcare and lunch are provided at each fair.

At the January event Bikes for Humanity will host a workshop on Bike Flat Tire Repair and Chain Maintenance at 1:00pm and Portland By Cycle will be offering our All-Season Cycling class at 2:00pm.

The Safe Routes to School program will offer free minor bike repairs for students and families. Mechanics from Bikes For Humanity and Bike Farm will volunteer their time to fix as many bikes as possible at the fair. Please deliver your bike for repair before 2:00pm to ensure it is completed before the Fair ends at 3:00pm.

For more information on the Fix-It Fairs, check out BPS’s website or download the brochure (pdf) for the upcoming event.