(March 12, 2015) – The Portland Aerial Tram will be open Sunday, March 15, 2015 from 7 a.m. to 5 p.m. to allow for improved access to Marquam Hill and Oregon Health and Science University during the Shamrock Run.

Avoid road closure delays and take the tram! During the popular run, which is sold out this year, the tram will provide the quickest and best access between South Waterfront and Marquam Hill. View road closures during the run at  http://www.shamrockrunportland.com/races/street-closures/

In addition, the tram will have a variety of free, fun activities for the whole family from 11 a.m. to 2 p.m. at the lower station. Kids can bring home a leprechaun trap for St. Patrick's Day or pick up a Portland Tram activity book. Take the tram to the top of the hill and cheer on the runners at the half-way point. All crafts and activities are free. Round trip fare: $4.35; children 6 years of age and under ride for free!

Portland Aerial Tram normal hours of operation are weekdays 5:30 a.m. to 9:30 p.m., Saturdays: 9 a.m. to 5 p.m.. The tram is open on Sundays only from May through September except for special occasions.

The Portland Aerial Tram is owned by the City of Portland’s Bureau of Transportation and operated by OHSU.  It opened to the public on Jan. 27, 2007. The cabins, named Walt and Jean, travel 3,300 linear feet between the South Waterfront terminal adjacent to the OHSU Center for Health & Healing, and the upper terminal at the Kohler Pavilion on OHSU's main campus. Traveling at 22 miles per hour, the tram cabins rise 500 feet for the three-minute trip over I-5, the Lair Hill neighborhood and the Southwest Terwilliger Parkway. Visit http://gobytram.com . Find the tram on Twitter @PortlandTram  and Facebook at http://www.facebook.com/portlandaerialtram.

The Tram will run from 7 am to 5 pm and there will be special activities for children from 11 am to 2 pm.

(March 12, 2015)  Is this the weekend you'll engage in "especially Active Transportation" - will you be in this Sunday's Shamrock Run? 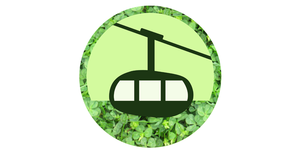 Whether you're putting on the sneakers or doing the cheering make sure to come by the Portland Aerial Tram for some post-event relaxation and family time. The Tram will be running on Sunday from 7:00am to 5:00pm to help relieve traffic congestion for Marquam Hill and  OHSU-bound travelers, but anyone can ride! You'll have great views of the city, the river, and the runners along the 15k and Half Marathon routes - and children 6 & under ride for free.

After the event come to the Shamrock Family Fun Day at the lower Tram station. From 11:00am to 2:00pm we'll have free arts and crafts for the kids. Bring home a Leprechaun Trap to make your St. Patty's Day festive, and plant some shamrock seeds for extra luck. Pick up a copy of the Portland Tram Activity Book, great for entertaining youngsters while the adults discuss their favorite running shoes. There will even be a quiet space with books for kids and parents to read up on leprechaun lore.

For a stress-free trip to the Tram take the Portland Streetcar NS line, or try walking or biking. You can also park free in the Whitaker Street lot. See you Sunday at the Portland Tram!

How do you show your appreciation for your transit driver? For hours on end, transit drivers manage to keep a schedule, check fares, give directions, announce stops, remember stop requests and more, all while safely maneuvering an extra-large vehicle though unpredictable traffic, adverse weather conditions and some really tight spaces! The fact is, transit drivers don’t have an easy job; they just make it look that way. 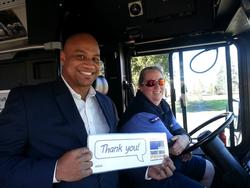 TriMet has designated March 18 as Transit Driver Appreciation Day and wants you to join them in celebrating the contributions of hard-working bus drivers and rail operators. A simple smile and wave when you board, or a thank you when you leave goes a long way, but you can also print out and personalize pre-made thank you cards available on TriMet’s webpage and give your driver a more tangible token of your appreciation. You can also submit an official commendation for your favorite driver, one who performs their duties well or even goes above and beyond any time of year!

All of our transportation options connect people with their community, ease traffic congestion and reduce pollution. Over 300,000 transit trips per day – more than 100,000,000 per year – are taken by Portland area residents just like you. Transit is an extremely important piece of our multi-modal transportation system and transit drivers really do help keep Portland moving.

(March 18, 2015) – The Portland Bureau of Transportation and Portland Police Bureau advise the traveling public that a crosswalk enforcement action is scheduled for Wednesday, March 25 at the unmarked crosswalk of SE 82nd Avenue and SE Cooper Street from 10 a.m. to 2 p.m. to raise awareness of pedestrian safety and Oregon traffic laws.

Under Oregon law, EVERY intersection is a legal crosswalk whether it is marked or unmarked.  Drivers must stop and stay stopped for pedestrians when the pedestrian is in the motor lane or the adjacent lane.

The SE 82nd Avenue and SE Cooper Street crossing has no paint lines at the crosswalk. It does have a pedestrian median island and signage to alert drivers to the possible presence of pedestrians in the crossing.

Southeast 82nd Avenue is one of ten High Crash Corridors that the transportation bureau has prioritized for stepped up education, enforcement and safety improvements.

Each crosswalk enforcement action involves a designated pedestrian crossing at a marked or unmarked crosswalk while police monitor how people driving, bicycling and walking adhere to traffic safety laws. Drivers who fail to stop for pedestrians in the crosswalk and pedestrians who fail to follow Oregon traffic laws may be issued a warning or citation.

Portland Bureau of Transportation’s Sharon White will serve as the designated pedestrian crossing the street during the first half of the action and a Portland police officer will serve that role during the second half.

Crosswalk enforcement actions are an effective way to communicate pedestrian right of way laws to both drivers and pedestrians. The transportation and police bureaus do enforcement actions about once each month in response to requests by community members, city traffic safety engineers, and Portland Police to educate the public on the rules at marked and unmarked crossings.

Crews are improving 1.37 lane miles of the street, grinding down old asphalt and preparing the street for repaving at a later date when weather permits.

Parking will be removed during the project from NW 14th to 16th avenues to make way for work crews and through traffic.  The Portland Streetcar will operate as usual.

PBOT street improvement crews work through the winter, adjusting tasks based on weather conditions. Crews will grind down old asphalt and prepare street surfaces for paving even in cold or rainy conditions. They will return to complete paving during a window of dry weather.

The traveling public is advised to expect delays while repairs are being made. We ask the public to travel cautiously, observe all lane closures and directions by flaggers, and use alternate routes if possible.  This work is weather-dependent and the schedule may change