(March 3, 2016) If you want to learn the latest on Open Streets, be sure to mark your calendar for the 2016 International Open Streets Summit to be held August 18-21 at Portland State University (PSU). In the past five years, Open Streets have gone from a novel idea to accepted practice in communities looking to improve walking and biking and activate public space. 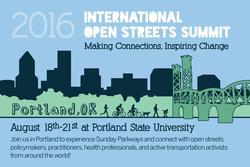 ms where the streets are opened to people and closed to cars. People traffic replaces car traffic, and the streets become “paved parks” where people of all ages, abilities, and social, economic, and ethnic backgrounds can come out and improve their health. Open Streets events are helping us reimagine the way we use our streets.

The Portland Bureau of Transportation (PBOT) and Sunday Parkways are teaming up with The Street Plans Collaborative, the Open Streets Project, 8-80 Cities, PSU’s Transportation Research and Education Center (TREC) and the Initiative for Bicycle and Pedestrian Innovation to host this three day summit. Along with the presentations, hands-on sessions and networking opportunities for participants from a variety of backgrounds, everyone will have a chance to wrap up the weekend by taking part in the Portland Sunday Parkways event on August 21. 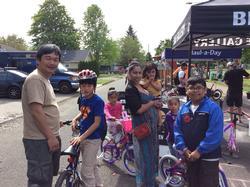 (March 4, 2016) – The Portland Bureau of Transportation advises the traveling public that street improvements will require lane closures on SE Holgate Boulevard from SE McLoughlin Boulevard to SE 15th Avenue starting Tuesday, March 8, through Friday, March 11, from 7 a.m. through as late as 5 p.m. each work day.

The lane closures will allow crews to grind .66 lane miles of pavement in preparation for paving at a later date.

PBOT street improvement crews work through the winter, adjusting tasks based on weather conditions. Crews will grind down old asphalt and prepare street surfaces for paving even in cold and rainy conditions. They will return to complete paving during a window of dry weather.

The public is advised to expect delays and consider using alternate routes if possible. Work hours likely will not affect evening rush hour, though morning peak hours may be affected. People riding bicycles should avoid the work zone, and either use alternate routes, open travel lanes or sidewalks.

We ask the public to travel cautiously, observe all lane closures and directions by reader boards and flaggers.

(March 7, 2016) – Effective immediately, the gates on the lower deck of the Steel Bridge are closed to bicycle and pedestrian traffic due to a gate malfunction. The closure is expected to last through Tuesday morning commute hours.

People walking or biking are advised to use an alternate route or cross the Steel Bridge on the upper deck. Be especially cautious and safely share the upper deck walkways because they are narrow. People biking may also take the lane on the bridge roadway. Alternate routes include the Broadway, Burnside or Morrison bridges.

Interactive map allows Portlanders to suggest where they would like to see BIKETOWN stations.

Crowdsourcing tool part of public outreach process that will include five open houses where Portlanders can also provide feedback about station locations.

(March 9, 2016) – A new website was unveiled today that will allow Portlanders to lend their voices to the BIKETOWN bike share station siting process. Through the website, the public can provide feedback on 300 proposed station locations in the BIKETOWN service area. This feedback will then be used by PBOT and Motivate to select the final 100 station locations. These stations will be installed ahead of the BIKETOWN launch in July 2016.

The BIKETOWN system will include 1,000 bikes available at 100 stations. Although Portland’s ‘smart bike’ system will allow people to park anywhere within the service area for an additional fee, BIKETOWN stations will be the primary places where people can rent and return the bikes.

An analysis of residential density, employment density, transit demand, recreation demand and major city attractions was used by PBOT and Motivate to determine the BIKETOWN service area. The station siting within the service area follows a detailed criteria that includes elements such as: visibility, solar exposure, cellular/GPS reception, proximity to transit and bike routes and proximity to affordable housing.

In addition to the website, Portlanders are invited to attend any of the five open houses offered by PBOT to ask questions and provide in-person feedback about station locations. The open house dates and locations are:

About BIKETOWN: BIKETOWN is Portland’s bike share system, launching in July 2016 with 1000 bikes available to ride from one point to another for a small fee. A partnership between the Portland Bureau of Transportation and Nike, the program will use innovative new “smart bikes” which will make it easy to find, rent and park a BIKETOWN bike. BIKETOWN is designed to be affordable and accessible, encouraging even more Portlanders to ride and allowing visitors to experience the city by bike. Portland joins over 60 US cities over 60 US cities, including New York, Chicago, Washington DC, San Antonio, Indianapolis, Boise and Austin and 500 cities worldwide that have popular, safe and successful bike share systems.

About Nike: Nike believes in the power of sport and physical activity to help strengthen communities. As a longtime partner with the City of Portland, BIKETOWN highlights the company’s commitment to make Portland even more active, vibrant and innovative. As the title sponsor of BIKETOWN, Nike designed the innovative visual identity for the program’s standard bike which will be the highly identifiable orange that is synonymous with Nike. In addition, Nike oversees the design and branding of the system’s logo, stations and physical presence, as well as a select number of limited edition bike wrap designs.

(March 9, 2016) BIKETOWN is coming to Portland in July! In January, Nike signed on as the title sponsor for Portland Bike Share, allowing us to increase the number of stations we are able to offer in the initial system roll-out. And now, we want your feedback on where to locate these stations.

An interactive online map went live today. The map offers approximately 300 options for bike share station locations. Visitors to the map can view all the proposed station locations within the initial service area and provide comments.

We are also hosting a series of five public open houses. All members of the community are invited to comment online or participate in the following open houses.