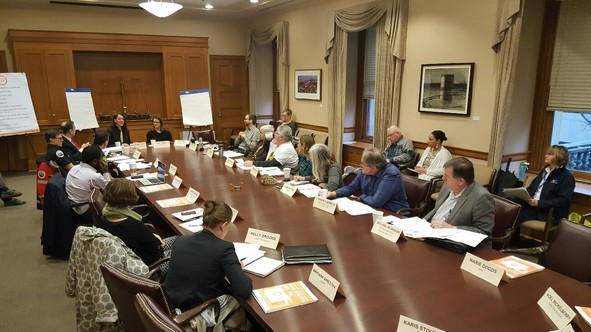 (Feb. 16, 2017) – PBOT and partners are pursuing a variety of actions related to the recently adopted Vision Zero Action Plan.

Today, the Portland Timbers announced a partnership with the City of Portland and the Portland Bureau of Transportation to support Vision Zero through education, public service campaigns and direct communication with area students.

Over the next several weeks, PBOT will activate four additional speed safety cameras on SE Division Street and 122nd Avenue, and will continue supporting several proposed state laws that would improve traffic safety.

PBOT has also identified funds to launch a DUII prevention program in downtown Portland that will include a private-for-hire voucher system and additional driver safety education opportunities. 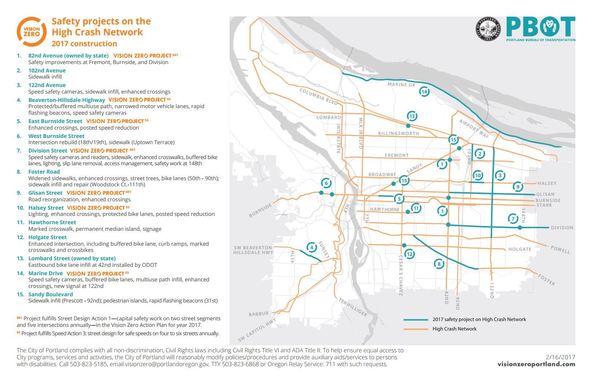 Click to view an enlarged version of this list and map of safety projects going to construction in 2017 on the Vision Zero High Crash Network.

PBOT is putting special focus on outer SE Division Street as part of its near-term multimodal safety strategy. The bureau is pursuing an emergency speed ordinance that could immediately drop the posted speed from 35 to 30 miles per hour. Under leadership from APANO and the Division Midway Alliance, Director Treat and Commissioner Saltzman are joining a community listening session on Feb. 23 to inform future outreach and capital projects in the area.

In addition to Division Street, PBOT will start or complete capital safety projects on 12 High Crash Network streets in 2017. Projects include changes to outer NE Glisan Street, where PBOT is analyzing reorganizing the travel lanes and will install enhanced crossings. 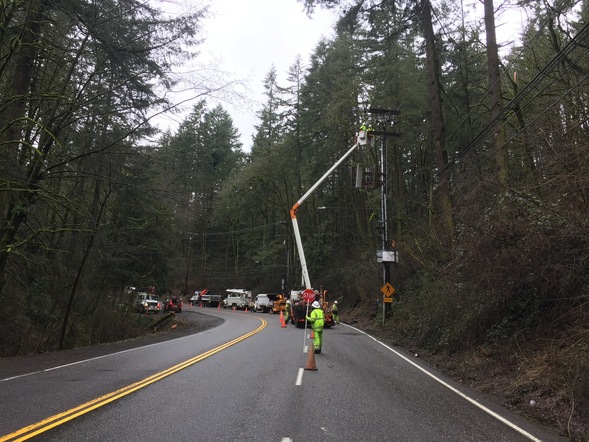 (2:25 p.m., Feb. 21, 2017) – The Portland Bureau of Transportation advises the traveling public that West Burnside will be fully closed to all traffic between NW Hermosa Blvd and SW Barnes Road intermittently into the Tuesday evening rush hour to allow Portland Parks & Recreation tree crews to safely remove large trees from a landslide near the roadway.

Flaggers are guiding traffic through the work zone, where eastbound and westbound traffic is alternating the use of one lane. Workers are closing that one lane as needed this afternoon, and may need to continue that into the evening rush hour.

Work hours had been planned to avoid morning and evening peak commute hours, to reduce the impact to the traveling public, while ensuring safe working conditions. Portland General Electric cut off power to the area to make it safe for tree removal. The work is taking longer than expected. Trees up to 100 feet tall are leaning over from the landslide, creating a hazard for the roadway.

People traveling in the area should use alternate routes, and consider using NW Cornell Road or U.S. 26. People walking or driving on West Burnside in the closure area should expect brief intermittent delays of up to 20 minutes at times as crews work to fell large trees. This stretch of road was the site of a landslide last week, and City engineers continue to monitor the area for further earth movement.

We ask the public to observe all lane closures and directions by signs, reader boards and flaggers, and use alternate routes if possible.

Flagging traffic through the area and lane closures may be needed from time to time on Wednesday to restore power to the area.

(Feb. 23, 2017) The Portland Bureau of Transportation (PBOT) has launched Patch-a-thon, a new initiative to fill the numerous potholes caused by this season's many winter storms.

As of Wednesday, PBOT had a backlog of more than 1,000 potholes that have been identified by residents and city crews. During Patch-a-thon, PBOT dedicates extra crews and resources to address the backlog. During normal operations, PBOT has two to three crews repairing potholes. During Patch-a-thon, this number will rise to 12 to 15 crews.

Transportation Commissioner Dan Saltzman helped kick off the effort by helping a crew fill a pothole on Thursday.

"PBOT crews worked through record snow and low temperatures this winter," Saltzman said. "Those winter storms left us with hundreds of potholes all over the city that residents are rightly concerned about. I encourage Portlanders to report potholes with as much detail as possible. And please be patient as we work through this backlog."

The first two days of Patch-a-thon are Thursday, Feb. 23 and Friday, Feb. 24. In the coming weeks, PBOT will hold a Patch-a-thon on those days when the weather permits effective and safe pothole repair. PBOT will continue Patch-a-thon until the winter pothole backlog has been cleared.

PBOT crews fill more than 8,000 potholes a year, working throughout the year. The work is weather dependent and crews are sometimes diverted to emergencies such as landslides. Heavy rain can cause potholes to fill with water, making the repairs less durable.

Portlanders are encouraged to report potholes by sending a detailed description and photos to PBOT dispatchers by email pdxroads@portlandoregon.gov or by using the PDX Reporter App. They can also call 503-823-1700, PBOT's 24 hour maintenance line.

PBOT has also published an interactive pothole map, so that Portlanders can track Patch-a-thon's progress. The map shows potholes reported since Dec. 1, 2016, showing the backlog created by winter storms and low temperatures. 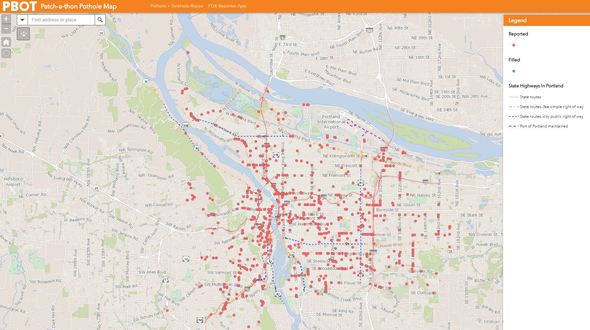 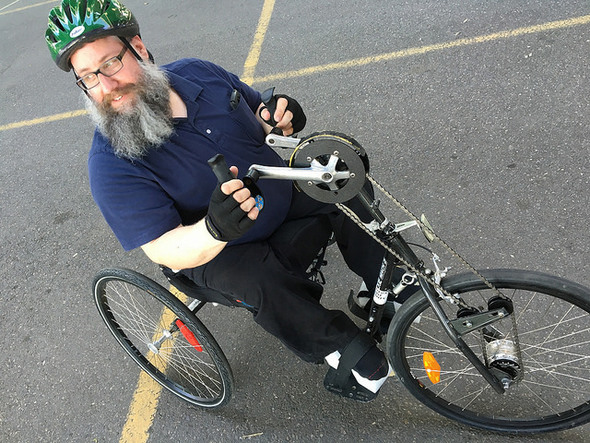 (Feb. 24, 2017)  Are you or someone close to you interested in bicycling, but due to ability or preference find you are unable to use a conventional bicycle?

At the Portland Bureau of Transportation (PBOT) we are committed to increasing access to bicycles for people of all ages and abilities. Currently, we’re working to develop a pilot project for the rental of adaptive bicycles as part of our recently launched BIKETOWN bike share program. The pilot project concept is focused on bicycle rentals (1-3 hours) for people with disabilities and/or folks unable to use two-wheeled BIKETOWN bicycles.

At this time, the intent is to focus on adaptive bicycle rentals through existing rental businesses located on or in close proximity to multi-use trails; like the Eastbank Esplanade and the Springwater Corridor Trail. Types of adaptive bicycles include, hand cycles, three-wheeled trikes and side-by-side tandems, which are all currently being considered for the pilot project.

But before we develop the program further, we need to hear from you! It is very important to PBOT that the project be developed with the users in mind, and therefore we want you to have an active role in the project development. We developed a survey to facilitate this step of the process. This survey is intended to help the project team and the stakeholder workgroup to more fully develop the pilot process. It seeks information about preference of bicycle type, desired routes, whether folks like to ride alone or in groups and other issues that will help in shaping this pilot project.

We appreciate you taking the time to share your thoughts and input: Adaptive Bicycle Pilot Project Survey.

Project development and planning will continue through spring 2017 with a stakeholder workgroup and a community workshop. The target date for the launch of the Adaptive Bicycle Pilot Project is summer 2017.

You can stay informed on the process by visiting the project website here: www.adaptivepdx.org or contact Liz Hormann, elizabeth.hormann@portlandoregon.gov or 503-823-5086. 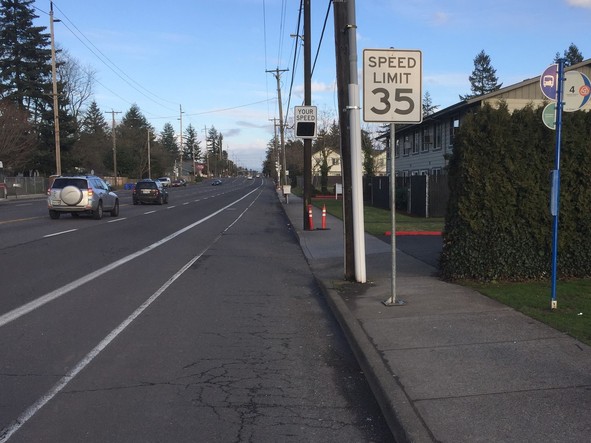 (March 2, 2017) In a unanimous vote, Portland City Council approved an ordinance that will establish emergency speed limits for portions of Southeast Division Street from SE 82nd Avenue to SE 174th Avenue at the city limits. The new speed on Outer Division will change from 35 to 30 mph.

Under Oregon law, a road authority may establish an emergency speed on any road that is different from the existing speed. In 2016 alone, five people died in traffic crashes on SE Division – four people walking and one person driving – and three people sustained life altering injuries. Seven of the collisions occurred on a two-mile stretch between 124th and 156th. For that reason, City Council declared an emergency speed limit on Outer Division.

“The correlation between speed and serious injury or death is clear,” said Transportation Commissioner Dan Saltzman. “We must ensure that all streets in our city are safe for people walking, biking, rolling or driving. I am grateful to my colleagues on City Council for understanding and supporting this urgent situation.”

“I deeply appreciate City Council’s leadership on the issue of traffic safety on Outer Division and throughout East Portland,” said PBOT Director Leah Treat. “The need for this action is clear. A person walking struck by a person driving 40 mph is twice as likely to die as a person struck by someone driving at 30 mph. What is more, people walking in East Portland are 2.5 times more likely to be killed in traffic crashes than in the rest of the city. It’s time to put aside the desire to get somewhere quickly because doing so can mean the difference between life and death.”

Over 10 years, SE Division has had more crashes that caused fatalities or serious injuries to people driving than any other corridor in the city with a total of 13 deaths and 117 serious injuries. It had the fourth highest total for people walking, and the second highest total for people riding bicycles. Outer SE Division is on the designated High Crash Network due to the high rate of crashes on the street. The traffic deaths and injuries on Outer Division greatly affect the diverse communities in the Jade District, Division Midway Alliance and other communities in East Portland.

The ordinance passed at City Council today was an emergency ordinance. Emergency Ordinances take effect immediately. They must be unanimous and at least four Council members must be present to vote.

The changes are the first step in the Portland Bureau of Transportation’s Outer SE Division Near-Term Safety Strategy. The strategy was developed as part of a previous ordinance passed by City Council on December 21st, 2016 in response to the deaths of two pedestrians who were killed in Outer Division traffic crashes within hours of each other on December 7, 2016.

In addition to the speed change, the city has also accelerated the installation of speed safety cameras on SE Division at SE 151st and on SE 122nd at SE Steele and SE Reedway. Safety cameras are proven safety tools that can reduce dangerous speeding and save lives. The cameras are mounted along High Crash Corridors and when people driving past them exceed the posted speed limit, they capture photos and video for review by Portland Police.

The speed safety cameras on SE Division and SE 122nd will be activated on Monday, March 6, 2017. The cameras will issue warnings for the first 30 days. Thereafter, people can avoid citations by traveling the posted speed limit. Any money received from the tickets pays for the program and safety improvements on the corridor.