Users who download Parking Kitty onto their smart phones will no longer need to pull a paper receipt from a City of Portland parking kiosk. Users simply need to enter the parking zone and their license plate number into the app. The app also allows users to remotely monitor how much time they have left and extend their parking time up to the maximum allowed in the parking zone. 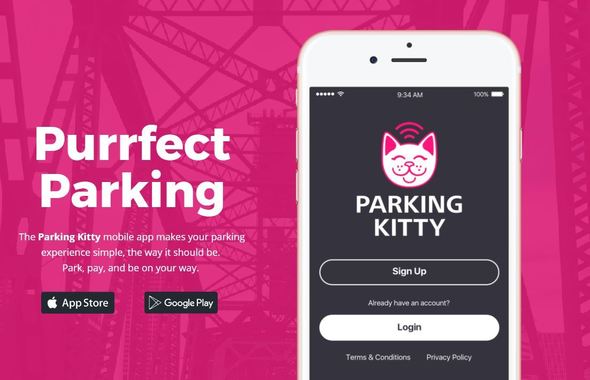 “Portland Parks & Recreation has seen great success with Passport Parking's app used in our Washington Park, and we're excited to join PBOT in rolling out the second generation app, Parking Kitty,” says Portland Parks & Recreation Director Mike Abbaté. “With this new app, visitors can park and enjoy all the world-class attractions of Washington Park without running back to the meter to add more time.”

"Portland State is very excited to be a partner in this innovative new app that creates a simple and efficient way for our students, faculty, staff and guests to pay for parking," said Ian Stude, PSU Transportation and Parking Services Director. "Parking Kitty makes on-demand parking easier for the PSU community -- many of whom drive infrequently and walk, bike, or use public transportation to get to campus."

Besides the PSU parking garages and Washington Park, Parking Kitty users will also be able to use the app in all of the City of Portland’s parking districts, including Downtown, Northwest, Marquam Hill, the Lloyd District and the Central Eastside Industrial District.

The name Parking Kitty is a play on the meaning of kitty as a pool or reserve of money. It is also a nod to the Portland’s well-known reputation as a cat-friendly community.

The app is available for both iPhones and Android devices. Users will be charged a ten cent convenience fee to use the app to pay for a parking session. 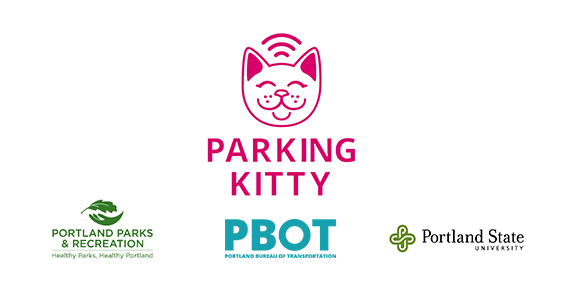 (9:30 a.m., May 23, 2017) A power outage affecting the Pearl District and West End area of downtown has also impacted City phone lines this morning. Inbound and outbound calls to the Portland Bureau of Transportation are not available. The public can reach PBOT staff using email, cell phones for staff who are assigned them, and the PDX Reporter App for iPhone and Android or on the web at www.pdxreporter.org. Some PBOT services also take service requests via web site forms.

Here are some links to some key services that are available using online forms or apps.

The 503-823-1700 phone line is not available for inbound calls. Email PDXroads@portlandoregon.gov  to reach our hotline for maintenance and repair issues, including potholes, sinkholes, and traffic signs that are down. We are working with Pacific Power to restore power to traffic signals in the downtown area.

The 503-823-SAFE (7233) phone line is not available for inbound calls. Use the on-line form to contact the Traffic Safety and Neighborhood Livability Team.

Use this online form.

Use this online form: https://www.portlandoregon.gov/transportation/71693

(4:30 p.m., Tuesday, May 23, 2017) The Portland Bureau of Transportation advises the traveling public to expect delays during tonight's evening commute, as a power outage in the West End area of downtown continues to keep traffic signals dark. Expect delays and use alternate routes if possible.

People driving, walking or biking should treat traffic signals without power as all-way stop signs. Power may potentially return to signals by 6 p.m., but signals will initially flash red until crews can switch them to normal operation. PBOT crews worked overnight to post temporary stop signs reminding the public to stop at intersections. Crews have also been coordinating work with Pacific Power and preparing to restore traffic signals to normal operation as soon as possible after power is restored.

The affected area covers much of the western part of downtown Portland, roughly from NW Davis St on the north to SW Main St on the south; from Interstate 405 on the west to SW Ninth Ave. on the east. One signal on Broadway was also affected at NW Couch St.

Expect significant travel delays for all modes of transportation in the area, except Portland Streetcar, which experienced minor delays due to traffic volume and stopping at intersections that normally would have traffic signals. For information on impacts to TriMet bus and MAX light rail service, check trimet.org/alerts.

(May 22, 2017) The Portland Bureau of Transportation wishes to remind the community that there will not be a street festival event for Last Thursday on NE Alberta Street this Thursday, May 25. Last Thursday street closure events were funded this year for June 29, July 27 and August 31 from 6 to 9 p.m. on Alberta Street from NE 15th Avenue to NE 30th Avenue.

PBOT is the new manager of the program and is pursuing a mission to build on Last Thursday’s tradition as a fun, family-friendly showcase of grassroots art and music.

PBOT will share more information about the upcoming season in June. There will be a number of new interactive art activities and community organizations at the event this year.

For this month, the Alberta Street galleries and shops will still have their Last Thursday openings and events. However, there will be no street or sidewalk vending permitted. Last Thursday vendors should not plan to vend this month because there will not be the support services necessary to keep the event safe and sanitary for May.

People who plan to visit NE Alberta Street this Thursday are encouraged to take public transit, or bike or walk to the area. Expect crowded conditions on sidewalks, because the street will remain open to vehicle traffic. Use caution, as vehicles including buses will serve NE Alberta Street as normal.

Vendors who wish to register for the June, July, and August events may do so at lastthurspdx.org.

In North Portland, the service area is expanding to the west to North Gay Avenue and will bring BIKETOWN to the Overlook neighborhood’s main street, N Killingsworth. A satellite expansion is also being piloted on Swan Island around the Daimler Trucks North America campus. The Northeast expansion will extend north to Jarrett Street and north east to NE 33rd Avenue north of Prescott and to NE 21st Avenue south of Prescott. It will encompass the Alberta Street business district along with businesses on N and NE Killingsworth. Two expansions in Southeast Portland will include Brooklyn's main street district and extend the boundary east to SE 43rd Avenue and 44th Avenue between SE Alder and Harrison.

"We launched BIKETOWN just over ten months ago," said Commissioner Dan Saltzman, "and already we are expanding it. That is a testament to BIKETOWN's popularity. I am especially glad that this expansion is possible without any additional cost to the public."

"Starting on day one, we received questions about when we would be expanding BIKETOWN," said Director Leah Treat. "That is why today is so exciting. With this expansion, we're delivering for our fellow Portlanders and bringing the benefits of BIKETOWN to more neighborhoods and businesses."

PBOT opened a public comment period on the expansion on May 2nd, 2017. Over 800 Portlanders provided input, and the response was overwhelmingly in support of the proposed expansion.

As part of the changes to the BIKETOWN service area, PBOT has also created two super hubs where users may park a BIKETOWN bike at any public rack without an additional charge. The hubs are located in the Central Eastside Industrial District and the PSU campus. Launched in May, PBOT has already seen a rise in the number of trips taken within the super hub areas. 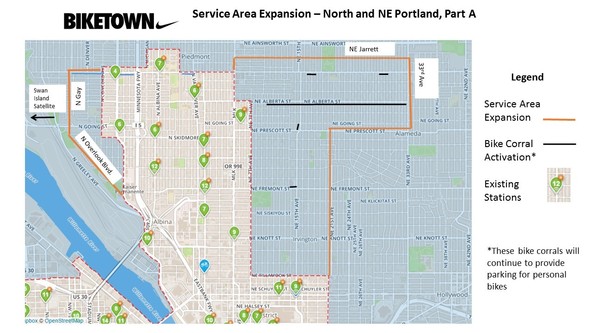 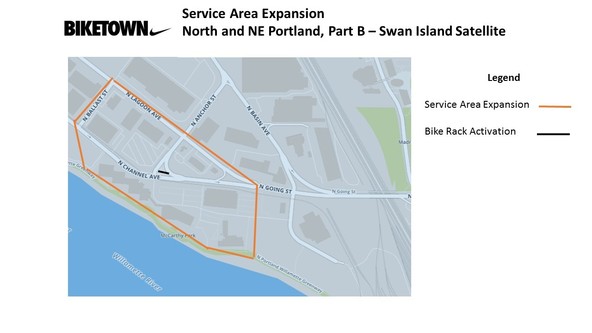 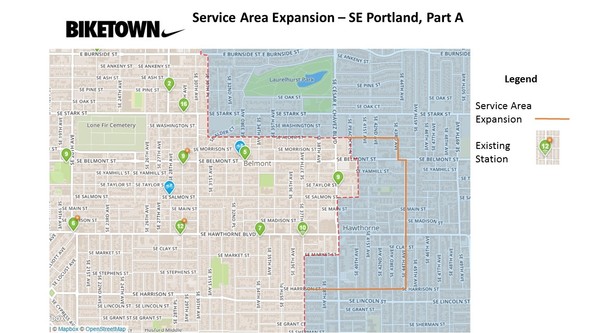 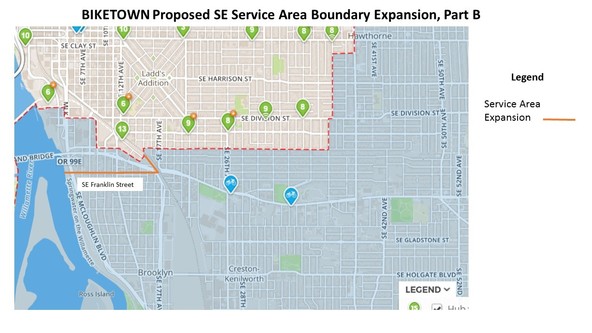