The Oregonian covered the new improvements coming to Maplewood Road in SW Portland. Maplewood road is a street used by our walking school buses at Maplewood School. The improvements along the street will make it much safer for families to walk to school and for all people to bike and roll in the neighborhood. Check out the article and our parent champion Ronda Zakocs advocating for Safe Routes. 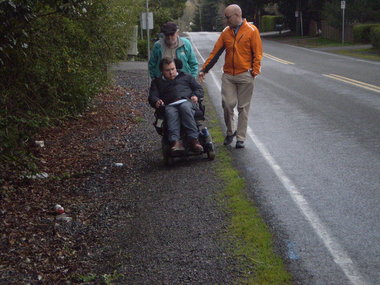 The Portland Bicycle Advisory Committee is a group of volunteers that advises the City Council and the City of Portland's bureaus on all bicycle-related matters. Each year the BAC dedicates one of its meeting to a bicycle tour of bike facilities.

If you are interested in bicycle design innovations or simply want an excuse for a ride before summer is out, join the BAC and Portland's Bicycle Coordinator Roger Geller on Tuesday, September 11th in the plaza of City Hall on SW Fourth Avenue. The ride will depart at 6:00 p.m.

The bike tour route will include approximately a dozen different bikeway treatments, including two examples of cycle tracks (separated bike lanes on SW Broadway and SW Moody), progressed signals that recognize cyclists as they approach an intersections, and the Gibbs Street pedestrian and bicycle bridge.

The bike ride will cover about 12 miles and will take about two hours.

The BAC meets at 6 p.m. on the second Tuesday of every month. Except for this month's bike tour, meetings are held in the Lovejoy Room in City Hall at 1221 SW 4th Avenue.

If you have questions or need more information, please call Roger Geller at 823-7671.

September is summer in Portland: it's a great time to give biking a try 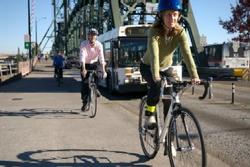 The Bike Commute Challenge is the nation's premier employer bike commute event. It's also a great motivator to jump on your bike and arrive at work energized and with a few more dollars in your pocket.

If you live too far to bike the entire way - no problem. You can combine biking with any other travel mode and still log it as a bike trip - even if you only bike one-way. See TriMet's  or C-Tran's web site for information on biking and public transit.

Check out this great story on our walking school bus program in ESaludoToday!

Meet at SE 60th and Salmon

Portland SmartTrips' Ten Toe Express will be offering a guided walk of Mt. Tabor this Saturday. Mt. Tabor is known for its lovely historical features, stellar views, and as one of three extinct volcanoes within a U.S. city.

There are still several free bike rides, guides walks and bicycle clinics on the calendar. See all of the SmartTrips Portland 2012 programs here.