Help reduce crashes (and you might even earn school credit) 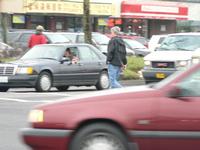 If you participate, you’ll work with a Portland Bureau of Transportation safety specialist to develop a program that best serves your needs.  There are several project options to choose from, including:

To learn more about this safety program, including how students may be able to earn educational credit for their projects, contact Sharon White at Sharon.white@portlandoregon.gov or 503-823-7100.

Latest data shows more than 42% of trips to partner schools are made on foot or by bike. 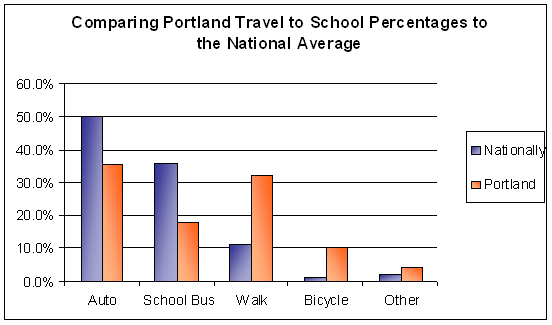 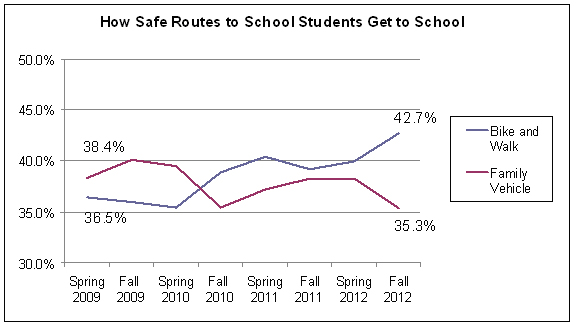 This year’s dates and locations for five Sunday Parkways, the popular summertime events presented by the City of Portland and Kaiser Permanente, were announced today.

“Sunday Parkways events are a great opportunity to get to know your neighborhood and your city. Nancy and I have attended them. As family-friendly events go, these can’t be beat,” said Portland Mayor Charlie Hales.

The five dates and locations scheduled for Sunday Parkways 2013 are:

Sunday Parkways is a series of free community events opening the city's largest public space – its streets – for people to walk, bike, roll and discover active transportation. Estimates put total attendance at more than 100,000 annually. Residents and visitors say they come to enjoy the traffic-free loop of streets connecting parks and schools filled with activities, music and vendors. It’s safe, family-friendly and a chance to meet neighbors.

"Sunday Parkways is the perfect prescription for health: it’s fun, free and gets you and your family and friends up and moving and out and about on a Sunday," said Dr. Keith Bachman, a Kaiser Permanente internist. "As a doctor, I know that exercise is truly vital for health, which is why we ask about it at every visit along with blood pressure and heart rate. My family and I look forward to Sunday Parkways every year.”

Sunday Parkways takes place on one Sunday each month from May through September in a different area of the city. More information about Sunday Parkways is available at www.PortlandSundayParkways.org and by calling 503-823-7599.

Swan Island houses the region’s largest cluster of advanced manufacturing and metal fabrication jobs. Over 10,000 employees work for regionally significant employers such as Daimler, Vigor Industrial, Columbia Wire and Iron, UPS, the Port of Portland, Columbia Distributing and the US Coast Guard.

Swan Island also contains an active group of bicycle, pedestrian and transit commuters. Daimler Trucks North America posted the highest number of new bike commuters in the 2012 Bike Commute Challenge. The Island is also home to over a mile of multi-use path along the Willamette River. 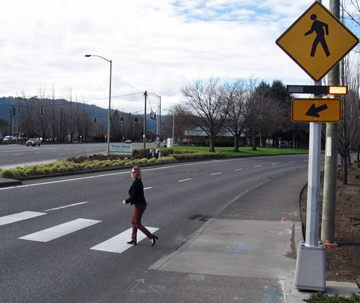 Swan Island’s mixture of semi-trucks, bicyclists, transit riders and pedestrians can create a challenging travel environment. Through the Going to the River Project the Portland Bureau of Transportation is investing over $2 million in federal funds to optimize access to one of the state's largest employment centers. Funded through the Oregon Department of Transportation’s State Flexible Funds program, the project bundles capital investments with commuter encouragement activities.

Until the Waud Bluff trail is completed, N Going Street provides the sole access on and off Swan Island. To accommodate the freight demands on the island, N Going at some points has six lanes. The road’s very steep grade tends to encourage high speeds.

At the bottom of this hill, pedestrians and bicyclists seeking to access the west side of Swan Island must leave Going’s separated multi-use path and cross N. Basin Avenue. The limited sightlines make this crossing even more challenging. “Before the improvements, I felt that crossing Basin Avenue was the most dangerous crossing on the island,” said Swan Island Transportation Management Director Sarah Angell.

As part of Going to the River project, this winter PBOT installed a Rapid Flash Beacon to increase safety by alerting drivers to pedestrians’ and bicyclists’ intent to cross the street. A Rapid Flash Beacon catches drivers’ attention with a pair of light emitting diodes (LEDs) mounted on a pole under a pedestrian crossing sign. When the beacon is activated by a push-button system, its yellow LEDs begin flashing. (Motorists are required to stop for pedestrians according to Oregon law even if the beacons are not lit.)

“It works like a charm,” said Angell. “Given the fast-moving traffic, the TMA has been very impressed by how well drivers are responding to the flashing lights. It has made for a dramatically safer crossing.”

(PORTLAND, Ore.) – The City of Portland Bureau of Transportation (PBOT) announced today that it is expanding the Jeld-Wen Field Event District parking program boundaries to provide more parking for event goers and reduce the impact on adjacent neighborhoods. The new event district boundaries will extend from the south side of West Burnside Street to Southwest Jefferson Street and from Southwest 18th Avenue down to but not including Southwest 12th Avenue. The expansion is necessary because the event district was parked virtually to full capacity during large events at the stadium.

“By expanding the event district down to 12th Avenue, we now manage an additional 182 on-street parking spaces for a total of 631 spaces available during authorized events at Jeld-Wen Field. This enables us to provide event goers more access while lessening the impact on adjacent neighborhoods,” said Robert Burchfield, City Traffic Engineer.

The event parking rate of $3.50 per hour at parking meters in the event district applies during event hours versus the non-event rate of $1.60 that applies all other hours. With the event district expansion, an additional 27 parking pay stations will be programmed to apply the event rate for a period of up to four hours, beginning 90 minutes before the start of the event.

City crews will begin installing new parking signs later this month and complete work by early March to coincide with the start of the Portland Timbers Major League Soccer schedule on March 3. Three signs per block will identify the event parking area and direct parkers to pay stations for event day and parking rate information.

“We are pleased with the effectiveness of the City’s event parking rate and the area parking permit program, which has helped make getting to and from Jeld-Wen Field efficient and fan-friendly,” said Ken Puckett, Senior Vice President of Operations for the Portland Timbers.