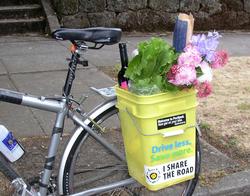 Summer is officially here and that means things are in full swing at Portland’s farmers markets. We Portlanders love our farmers markets. Nothing beats getting out early, on a beautiful summer day, and taking in the sights, smells and sounds at your local market, where beautiful, fresh and healthy local produce and products abound. Some even have live music to entertain you while you shop. And what’s the best way to get there? By bike or foot of course! Many markets have bike parking available, and even if the bike parking is full, it’s bound to be easier to find a place to lock your bike than it is to find a place to park your vehicle.

If you live in Downtown, Northwest or the Pearl District, you have many options. The Hillsdale Farmers Market serves those in the Southwest hills. North Portland has some great markets in St Johns and in the Kenton neighborhood. Hollywood, Cully, King, Irvington and Lloyd farmers markets, to name a few, make Northeast Portland a real mecca for farmers markets, and Southeast Portland has a wide variety of markets happening in Buckman, Moreland, Montavilla and Woodstock neighborhoods, as well as the Peoples Coop market and even an international farmers market in Lents.

With over 20 farmers markets, in every quadrant of the city, and happening on every day of the week, it’s very likely there is a farmers market within a few miles, and thus easy walking or biking distance, of your home, school or work.  (There's even an app for that - check out the Market Mapper.)

So grab your reusable bag, basket, backpack or panniers, and hop on your bike and take a health-inducing ride to your local healthy farmers market.

(PORTLAND, Ore.) – The City of Portland Bureau of Transportation advises the traveling public that street improvements will require a road closure on NE Wasco Street between NE 81st and NE 82nd avenues from Tuesday, July 9 through Friday, July 12, all hours and all days. The public is advised to expect delays in the area.

This closure is necessary to remove and replace both the base and the surface layers of NE Wasco Street to stabilize the foundation of the road and prevent potholes and other surface distresses.

A detour will be in effect to accomplish this work.  Eastbound traffic will be detoured to NE Halsey Street, east over the Halsey overpass to NE Jonesmore Street  then back to 82nd Avenue.  West bound traffic will be detoured west on NE Multnomah Street  then north on 81st Avenue and back to 81st Avenue and Wasco Street.  We ask the public to travel cautiously and observe detour directions.

Local access to residences and businesses will be provided.  This work is weather-dependent, and the schedule may change.

VIDEO of Commissioner Novick warning the public about safety and speeding:

The Portland Police Bureau has stepped up enforcement of speeding and other traffic laws near the closure of SE Cesar Chavez Boulevard to ensure motorists follow detour and construction signs and to prevent cut-through traffic on residential streets.

As of late Monday, officers from the Traffic Division had issued more than 80 traffic citations in the neighborhoods surrounding the construction area. The police enforcement is part of a collaboration among multiple city bureaus and public agencies to minimize the impact of several large-scale construction projects this summer in Southeast Portland.

TriMet, the Bureau of Environmental Services and the Portland Bureau of Transportation are working on projects to expand public transit access, update the streetscape design onSE Division Streetand improve sewer service. To minimize the inconvenience to the public, the agencies have coordinated their construction schedules to try to ensure that major road closures on north-south corridors don’t overlap. They are working with the Police Bureau to provide targeted traffic enforcement in neighborhoods near the construction zones.

“Residents in the area surrounding the Cesar Chavez construction zone have noticed a significant increase in traffic through their neighborhood,” said Lt. Chris Davis of the Traffic Division. “The City has received numerous complaints about speed and stop sign violations in the area. The Portland Police Bureau encourages people travelling through the area to use major streets instead of side streets.”

Residents passing through Southeast Portlandcan plan ahead by viewing the SE Portland Summer Construction Road Closures maps and details at www.portlandoregon.gov/transportation. The site includes links to the several major street closures in Southeast Portland this summer.

Anyone who uses SE Cesar Chavez as a regular commute route is advised to use SE 30th or SE 50th avenues, the designated detours, or other major north-south streets.

Some of the largest transportation corridors inSoutheast Portlandwill be closed around the clock for weeks at a time this summer.

A detour will be in effect. Work crews will close the road to travel from 7 a.m. until 5 p.m. each business day. Southbound traffic will be directed to continue west on NE Middlefield Road to NE Vancouver Way. Northbound traffic will be directed to continue north on NE Vancouver WaytoNE Middlefield Roadthen onto NE 6th Drive. Access to businesses and residences will be maintained.

Flaggers will be on NE 6th Drive to direct traffic at the intersections with NE Vancouver Way and NE Middlefield Road.

The public is advised to travel cautiously in the work zone and to observe detours and directions by flaggers. Travelers are advised to use alternative routes if possible. Paving is dependent on weather and the schedule may change.

MONDAY, JULY 8, 2013 – The Oregon Legislature today secured $3.6 million for sidewalks and crosswalks on Southeast 136th Avenue in Portland. The funding had been a top priority for State Rep. Shemia Fagan and several other area lawmakers.

The Oregon Legislature is expected to finish its business and call the 2013 session to an end later today.

“The goal is safety for all residents, regardless of the mode of transportation they prefer,” said City Commissioner Steve Novick, who oversees the Bureau of Transportation. “Sidewalks, crosswalks, signage, paving, bike lanes – they all come down to safety. Today’s news from Salem means the Legislature and the city are working hand-in-glove on this issue.”

The issue became galvanized on Feb. 28 when 5-year-old Morgan Maynard-Cook of Portland was struck by a car and killed while crossing a stretch of Sutheast 136th.

“For too long, East Portlanders have been told to ‘be patient,’” Rep. Fagan said today. “But Morgan’s family, and every family, has a right to be very impatient when it comes to the safety of their children. I am proud to make East Portland a big winner in my first session in the Oregon House.”

Mayor Charlie Hales praised the lawmakers for their action. “When the city needed partners on this sidewalk project, Rep. Fagan was right there. So were Sens. Monroe, Dingfelder and Thomsen, and Reps. Reardon, Keny-Guyer and Vega Pedersen,” he said. “We often say safety is the northern star that guides our decisions. Our legislators obviously live by that code, too.”

Sen. Thomsen spoke about the project on the Senate Floor today, calling it one of his top priorities for the 2013 session.

The first of three phases of a city project to create sidewalks on Southeast 136th Avenue between Powell and Holgate boulevards will get under way this fall or winter. The city budgeted the project at $1.2 million.

The Legislature’s action today will prove to be a huge boon for the project, Hales and Novick said.