Enjoy a walk this month - or lead a walk for others to enjoy.

Everyone is a pedestrian at some point during the day, whether it’s by walking, rolling or strolling. People walk for thousands of reasons; to get to the bus or MAX, to go to the store, to exercise the dog, commute to work, spend time with friends, unwind after a long day, explore a neighborhood, get to school, maintain their health or to just have FUN!

Fashioned after Pedalpalooza, Oregon Walks created Walktober with the hope of helping people throughout the region find new ways to walk, find places to walk and meet new people to enjoy walking with.

Oregon Walks conceived Walktober to promote walking as a fun, healthy and ubiquitous activity in the Portland metro region. Walktober is an open calendar, which means that anyone can create, post or lead a walk. Walks are put on by people like you! So consider joining the fun and creating your own unique walk to post on the calendar.

Trained professionals of the Portland Fire & Rescue Technical Rescue Team will lead the exercise. The exercise also includes representatives from the City of Portland, whose Bureau of Transportation owns the tram;  Oregon Health & Sciences University, which manages it along with Doppelmayr USA.

Portland Transportation Director Leah Treat and Mayor Charlie Hales’ Policy Director Josh Alpert will be among the seven passengers to be evacuated in the exercise. Using ropes and harnesses, the team will lower the passengers 100 feet to the top floor of the OHSU Casey Eye Institute’s parking garage.

The training allows crews to practice an aerial rescue of tram passengers in the event the tram is stopped for an extended period of time with passengers on board. If members of the public contact you with questions about the training, please inform them that this is a scheduled training exercise and not a real emergency.

The exercise has been conducted annually since the Portland Aerial Tram opened on January 7, 2007.  There has never been a real emergency.

The exercise is designed as a last resort safety precaution for the more than 5,000 daily commuters and tourists who ride the tram. The Portland Aerial Tram is one of only two used for urban transit in theU.S.

SPECTATORS:          The Portland Aerial Tram is closed on Sundays during the fall and winter. As a result, the training exercise will not interfere with regular operations. For those interested in observing, please do so from nearby locations and refrain from entering the Casey Eye Institute parking lot.

The Portland Aerial Tram is owned by the City of Portland’s Bureau of Transportation and operated by Oregon Health & Sciences University.  It opened to the public on Jan. 27, 2007. The cabins, named Walt and Jean, travel 3,300 linear feet between the South Waterfront terminal adjacent to the OHSU Center for Health & Healing, and the upper terminal at the Kohler Pavilion on OHSU's main campus. Traveling at 22 miles per hour, the tram cabins rise 500 feet for the three-minute trip over I-5, the Lair Hill neighborhood and the Southwest Terwilliger Parkway. Visit http://gobytram.com . Find the tram on Twitter @PortlandTram  and Facebook at http://www.facebook.com/portlandaerialtram.

(Oct. 4, 2013) - International “Walk + Bike to School Day” will be celebrated with a news event at Maplewood Elementary School in Southwest Portland at 7:40 a.m. Wednesday, October 9. More than 150 children are expected to meet up and walk or bike to school with City Commissioner Steve Novick, Transportation Director Leah Treat, Portland Timbers’ Timber Joey and community leaders.  At the school, teachers, parents and community leaders will talk about the health and safety benefits of being active.

The event also celebrates Portland’s Safe Routes to School program, which now involves K-8 students in almost all Portland schools. It is one of the nation’s most effective programs of its kind: 42 percent of the trips to Portland elementary schools are now made on foot or by bike,  a 35 percent increase since Safe Routes to School began in 2006. That is significantly higher than the national average of 12 percent.

WHAT:  Five “Walking School Buses” will depart from different locations throughout the neighborhood and convene at the school.  Students will carry colorful Safe Routes to School banners.

Members of the media can report from the school as children arrive or may join Commissioner Novick, Director Treat, Timber Joey and Maplewood Principal Annie Tabshy in their walk to school at the intersection of SW 48th   Avenue and SW Maplewood Road at 7:40am.

WHY: Experts say that children need at least 60 minutes of physical activity every day. Sadly, our kids aren’t getting it. While the rate of children walking and biking to school in America has dropped during the past few decades, the rate of children who are obese has soared. The October 9th event will celebrate eight years of work to reverse this trend with its Safe Routes to School program, one of the most effective in the nation.

Portland welcomed its eighth Street Seat in front of the Center for Architecture at 403 NW 11th Avenue, designed by Philadelphia architect Bob Trempe 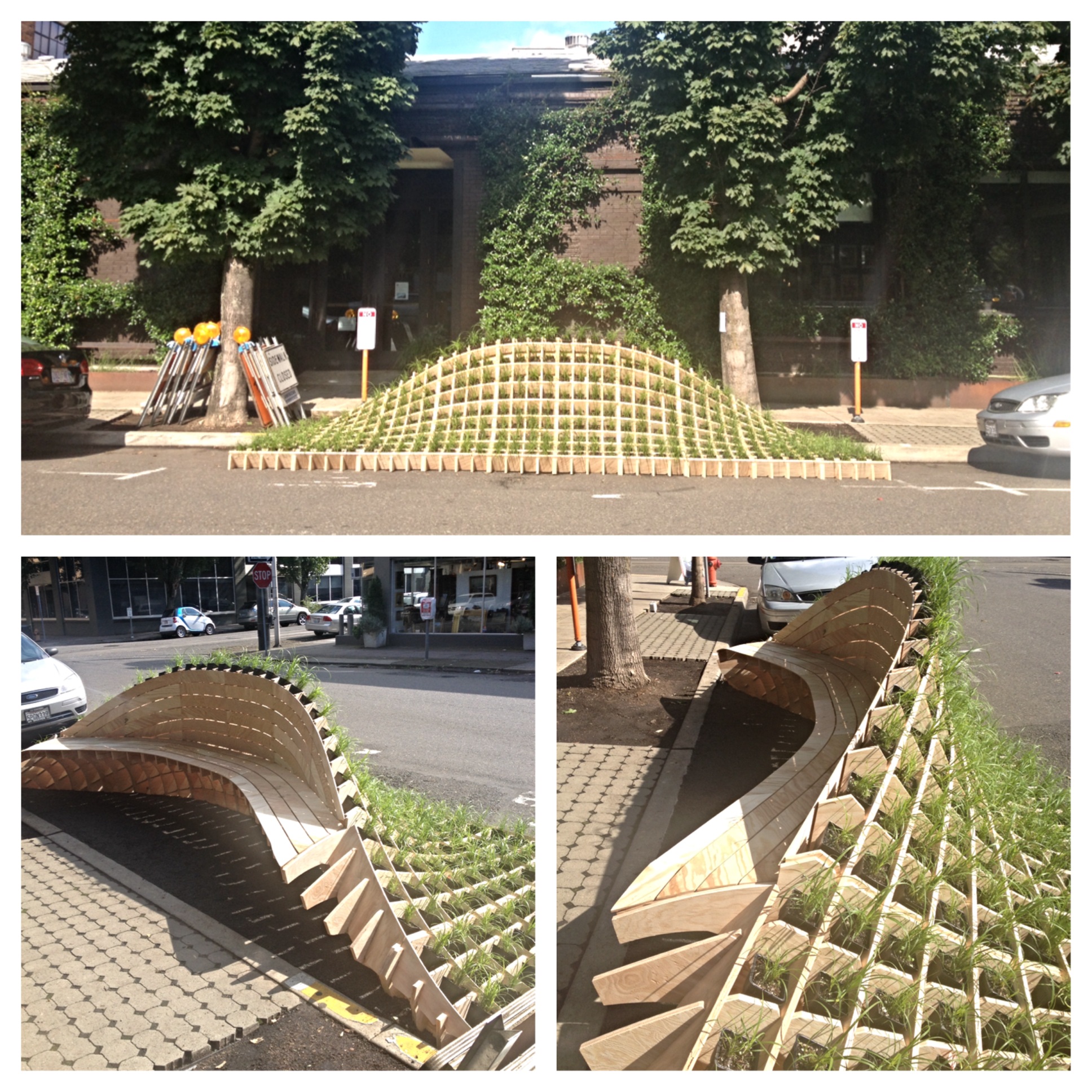 Yesterday Portland welcomed its eighth Street Seat in front of the Center for Architecture at 403 NW 11th Avenue.Designed by Philadelphia architect Bob Trempe, “LIFT” is the winner of the Portland Design Festival Street Seat design competition. The Portland Bureau of Transportation (PBOT) partnered with the Center on this project.

LIFT is also Portland’s first non-commercial Street Seat. While Portland’s other seven Street Seats temporarily extend the commercial space for the host business, LIFT is public space open to all.

Portland Design Festivals Street Seat Competition received 21 submissions from across the United States. PBOT staff participated in jury selection. Lift will remain on site until December 1st. Designs from all the awardees can be viewed on the competition web site.

PBOT’s Street Seats program provides a venue for businesses and community organizations to build a temporary platform in the on-street parking lane. The platform is the same height as the curb and extends the sidewalk space in order to add additional outdoor seating for a restaurant or to provide additional public space for people to stop, sit, and take in the of life of the street.

The Center for Architecture is an initiative of the Portland Chapter of the American Institute of Architects (AIA). The vision for the Center is a place for education, discourse, and dialogue about the design and making of the built environment.

Get ready for International Walk+Bike to School Day on Wednesday, October 9. Students in Portland, across the nation and beyond will be taking to the streets to walk and roll to school.

Be sure to participate by walking or rolling to school with your student or by getting involved in your local school community to help make this school year a success. If you don’t have young ones in school, keep your eyes open for all those walkers and rollers on the road on October 9th, and be sure to slow down and give them a big thumbs up!

Portland has more than 80 schools participating in Walk+Bike to School Day. This event is part of the Bureau of Transportation’s Safe Routes to School program that works with schools, parents and community groups to make walking and biking to schools fun, easy, safe and healthy for all.

Helping students stay active every day - through healthy activities like walking and biking to school - is all about solving many of the seemingly overwhelming problems facing our communities (like obesity, chronic diseases such as diabetes, green house gases and congestion).  Creating a healthy school community serves and supports active and productive students, parents and teachers.

Check to see if your school is registered for International Walk+Bike to School Day.