American Heart Association designates April 2nd as a day to step up for your ticker.

It’s April, it’s still wet outside, and maybe your New Year’s Resolutions are needing a boost. We’ve got just the thing help keep you motivated and on track. National Walking Day is a nationwide call-to-action for all Americans to adopt a healthy lifestyle. The American Heart Association wants you to join your friends, family, school or other community group to in taking the first step to becoming more active and pledge to take a walk toward better health on Wednesday, April 2. 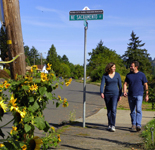 These days, more of us spend more time sitting at work than ever before (standing work station anyone?!), and as a nation we’ve become much less active. Statistics show that 1 in 2 men, and 1 in 3 women are at greater risk for heart disease and research shows that an inactive lifestyle is a major contributer. But take heart, walking is one of the easiest, most effective activities you can do to improve your health. Even a small amount can make a difference.

Since we’re all about transportation and fostering a livable city, we encourage you to find ways to replace just a few driving trips per week with a walking trip. The American Heart Association recommends 30 minutes of walking a day – and it doesn’t all have to be at once. By walking to your neighborhood grocery store, coffee shop, school, park, bus stop or even a friends house, you’ll be on your way to a healthier lifestyle, a healthier community and a healthier you!

If you’d like some inspiration for your next walk, check out PBOT’s series of Neighborhood Bike/Walk Maps. You’ll find public art, local parks, heritage trees and other attractions listed – plus every school and library in your area, grocery stores, water fountains, and even all the bus stops (in case the rain returns).  And starting in May, hop aboard the Ten Toe Express, guided walks that show off great Portland neighborhoods at a comfortable pace.

The lane closures are necessary to allow crews to pave .33 lane miles. This is the second phase of the two phase process.  Crews last month had ground down the old asphalt to prepare for paving during a stretch of dry weather.   Paving is weather dependent and the schedule may change.

At least one traffic lane in each direction will remain open at all times. Local access to residences and businesses will be provided.

Fun, free activities for families to help you enjoy the Spring weather 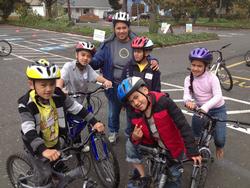 Safe Routes to School is hosting their 4th Annual Spring Kick-off on Saturday, April 12th.  This is a family-fun event that celebrates health, safety, and physical fitness.  Learn about Walking School Buses and Bike Trains!

There will be activities for parents, students, and younger children including a bike rodeo, map reading and route planning, learn to ride a bike class, free minor bike repair, bike decorations, and helmet sales for $6.  There will be a community bike ride at 1pm (with bikes and helmets available to borrow).  A free healthy lunch will be served at noon for the first 100 people.

Plan your trip there by bike or transit using TriMet's trip planner!

(April 10, 2014) – Portlanders prefer a new street maintenance fee over other options for investing in longstanding maintenance and safety needs, according to a new public opinion survey that is part of the city’s efforts to gather input on transportation funding.

The 800 respondents in the telephone survey were initially divided in their support of a street maintenance and safety fee, when presented with options of $8 a month or $12 a month fees. When first asked, support for a fee ranged from 44 percent to 47 percent, while opposition ranged from 48 percent to 50 percent, according to a report on the survey results by DHM Research of Portland.

Support for paying a monthly fee increased by 5 to 7 percentage points after respondents learned about options for how it might be implemented. A strong majority of residents said that seven of the eight options would make them more likely to support a fee. The three most popular options to include with a street fee were: a combination of preventive maintenance to keep streets in good condition and adding flashing beacons and other safety features at dangerous intersections; a provision that would ensure the revenue could not be used for other purposes; and a discount for low-income households.

“It’s clear that Portlanders are more likely to support a street fee when they learn more about what it could pay for,” said Commissioner Novick, who oversees the Portland Bureau of Transportation. “Street maintenance and safety continue to be top priorities for Portland residents, and they will be at the top of the list of any funding package we put before council in the coming months. Congress isn’t coming to the rescue any time soon, so we here in Portland have to take control of our own destiny.”

Commissioner Novick and Mayor Charlie Hales have said they are committed to addressing transportation funding this year.

“We haven’t developed a funding proposal for the City Council to consider,” Commissioner Novick said. “The results of this survey and the comments we hear at the upcoming town hall meetings will help us create a way to address longstanding maintenance and safety needs.”

Respondents were asked about several funding options that some Portlanders suggested at community meetings in recent months. The options included a city sales tax, a city income tax, a tax proportional to what a person pays in state or federal income taxes, and city bond paid by property taxes. Just a one-quarter to one-third of the respondents said that any of these was more preferable to street maintenance and safety fee.

The survey also affirmed results of a similar survey in January that found maintenance and safety are high priorities for Portlanders. Respondents to the March survey who strongly or somewhat support an $8 a month fee said they did so because “roads need maintenance” (39%) or because “safety is important,” “protects bicyclists” or “protecting pedestrians” (37%).

Commissioner Novick and John Horvick of DHM Research shared the findings at a news conference today in the Lovejoy Room at Portland City Hall.

DHM Research conducted a telephone public opinion survey of 800 Portland residents from March 27 to April 1. The scientifically valid survey results are part of the Transportation Bureau’s effort to gather input from the public on an effort to address longstanding transportation needs.

Members of the public can take the survey themselves starting today at the funding project web site www.ourstreetspdx.com.

The town hall meetings will provide an opportunity for the public to speak with transportation staff, ask questions and make comments for the mayor and commissioner to consider as they explore ways to improve transportation funding.

The April 16 to May 1 town halls follow three meetings in February where Mayor Hales, Commissioner Novick and Director Treat discussed transportation needs with the public.

Mayor Hales and Commissioner Novick also convened a Transportation Needs and Funding Advisory Committee in January to advise the commissioner on a transportation funding package. The committee helped draft the language used in the telephone surveys.

One traffic lane will remain open at all times to allow crews to pave that street. Local access to residences and businesses will be provided.