Update: the lane closures will be extended through mid-day January 20, and there will be no parking on SW Madison Street until all lanes reopen.   This extension became necessary after crews unexpectedly needed to replace a storm drain and some sewer pipe.

(January 5, 2015) - The City of Portland Bureau of Transportation advises the traveling public that street improvements will close the right eastbound lanes and bus stop on SW Madison Street between SW Fourth and Fifth avenues next to City Hall for seven days in early January.

The lane closures are necessary to allow crews to repair the failed road base at the southwest corner bus stop and replace the asphalt with a stronger concrete surface. The concrete will need up to five days to cure.

In addition to carrying traffic within downtown, the street feeds motor vehicle, bus and bicycle traffic onto the Hawthorne Bridge.  Travelers are advised to expect delays and use alternate routes if possible.

Transit customers: During the project, the bus stop will be closed. The nearest alternate bus stops are on the transit mall and on SW Madison Street and First Avenue.

Drivers and bicycles: The parking lane on SW Madison Street will be converted into a travel lane and will be the sole travel lane for at least the first two days of the project. Crews will open up the center lane if possible during the latter part of the project.

To minimize delays, work crews will adjust the lane closures if possible as follows:

In addition, parking will be removed from SW 4th Avenue in front of City Hall.  Disabled parking will remain open for use on that block.

We ask the public to travel cautiously, observe all work zone signage, and use alternate routes if possible.  This work is weather-dependent and the schedule may change.

Keep your bike and components safe with these essential steps

(January 7, 2015) Bike theft is getting a lot of attention recently - and with good reason. Bike theft is a deterrent for people riding bicycles and we want to keep people on their bikes and protecting their investments. Below are seven essential tips for keeping your bike safe. There is also a handy card you can download that shows the best way to lock your bike and a place to write down your serial number for recovering a stolen bike. 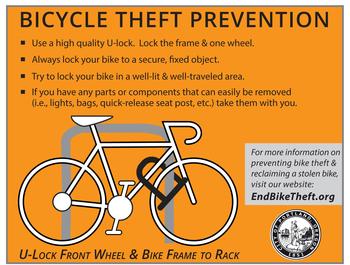 1. Always use a U-lock. Never use only a cable lock.

2. Lock your wheel and frame together (see card for example).

3. Use a bike rack (sign poles are not as secure).

4. When possible, do not park your bike on the sidewalk or street overnight.

5. Lock your bike in a well-lit and well-traveled area.

6. Take lights and other easily removed items with you.

7. Write down your serial number. It's the best piece of information you can have to recover your stolen bike. (Download the card for more information).

While our 7 tips are short and sweet, we do want to expand on a few of them. For example, we understand that not everyone has bike storage in their homes and that parking in public (Tip #4) or open places may be the only option. City bike racks are designed for short-term uses, such as going out to eat or visiting a friend. If you do not have more secure bike parking available, we suggest talking with your neighbors and property manager about creating a secure parking area. City building codes require all new multi-family (apartment) and commercial buildings (e.g. office) to have long-term bike parking facilities that are more secure than public racks and are weather protected. However, many buildings were constructed before building codes required bike parking. This leaves a gap in bike parking for many people. However, property managers may be responsive to tenants requesting essential services as part of their leases.

Our last tip (#7) does not actually help prevent bike theft, but does allow you to claim a bike that the police have recovered. Proof of ownership is essential for getting your stolen bike back. Your serial number and a picture of your bike are your two best preventative measures. An original receipt, if you bought the bike new, is also very useful.

For even more detail about securing your bike, check out this article from the Office of Neighborhood Involvement's pages.

The same detour described below will be in effect during this closure.

Private construction will close SW Jefferson St between SW 11th Ave and SW 12th Ave from 7 am to 7 pm on Saturday, January 17, 2015.  The closure is being scheduled on a Saturday to minimize disruption.

The same detour described below will be in effect during this 12-hour closure.  It is expected to be the last closure for this project.

A detour will be in effect during the closure. SW Jefferson traffic will be directed south on SW 11th Avenue to SW Clay Strett to SW 12th Avenue and back to SW Jefferson Street. People riding bicycles should follow the same detours as motor vehicle traffic. People walking through the area should use the sidewalk on the south side of SW Jefferson Street; the sidewalk on the north side has been closed for construction and will remain closed through the weekend. Local access to businesses and residences will be maintained.

The closure is necessary for the contractor to set up a tower crane for the construction site on the north side of SW Jefferson Street.

(January 9, 2015)  – The City of Portland Bureau of Transportation advises the traveling public that crews will pave NE 28th Avenue from NE Glisan Street to NE Broadway from Monday, January 12th through Wednesday January 14th, 7 a.m. through 5 p.m. each weekday.

Lane closures will be in effect during those times to allow crews to pave 1.39 lane miles. Access will be maintained for businesses and residents during the project.

These street improvements are part of the Transportation Bureau’s winter paving program in which crews adjust tasks based on weather conditions instead of halting operations until dry weather.  Crews will grind down old asphalt and prepare street surfaces for paving even in cold and rainy conditions.  They will return to complete paving during a window of dry weather.

This stretch of NE 28th Avenue was prepared for resurfacing in mid-November. With the expected stretch of dry weather next week, crews will complete the project next week.  The street was open for travel between the two phases of the project.