(June 21, 2018) The Portland Bureau of Transportation reminds the traveling public that the Portland Aerial Tram will be closed starting Saturday, June 23 for five weeks for track rope maintenance. It will resume service on Monday, July 30.

For safety reasons, during the work, the upper tram terminal elevator and upper platform will be closed as well.

During the closure, special shuttles will run daily from 5:15 a.m. to 9:30 p.m. weekdays and 9 a.m. to 5 p.m. on Saturdays. Shuttles will arrive at the stops every 5-10 minutes and the trip between campuses will take 30-40 minutes. Tram shuttles will only stop if someone is waiting.

Check the GoByTram.com web site for maps showing suggested routes by transit, bike and walking, as well as the tram shuttle route that will operate June 23 through July 30.

VIDEO: Watch a video that describes all the shuttle bus, transit, biking, BIKETOWN and walking options available during the tram closure 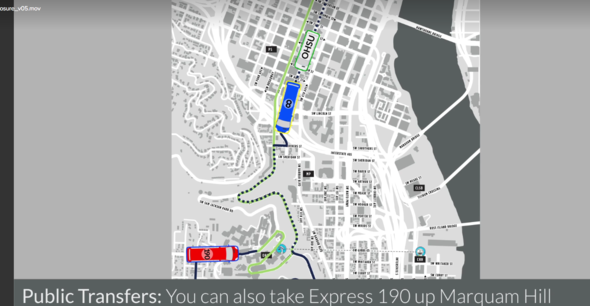 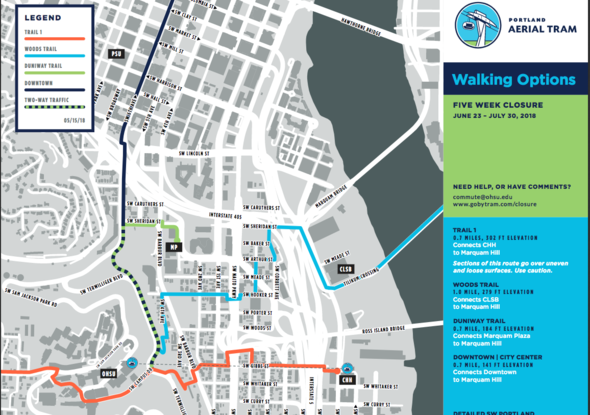 VIDEO: Learn more about maintenance on the Portland Aerial Tram, including the upcoming project to shift the track ropes, which is required every 12 years 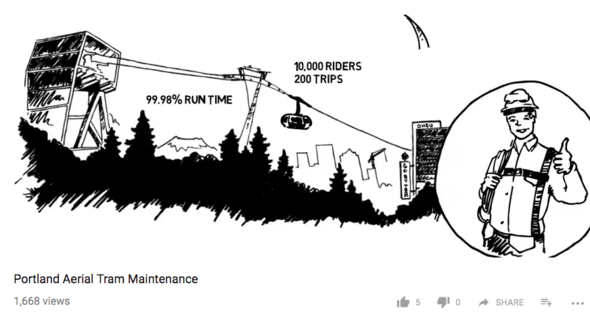 The Portland Aerial Tram is one of the busiest aerial tramways in the world, providing more than 18 million rides since opening in 2007. 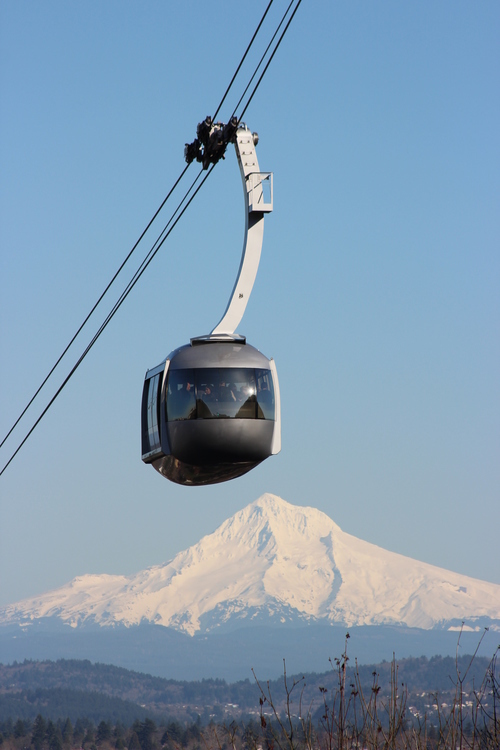 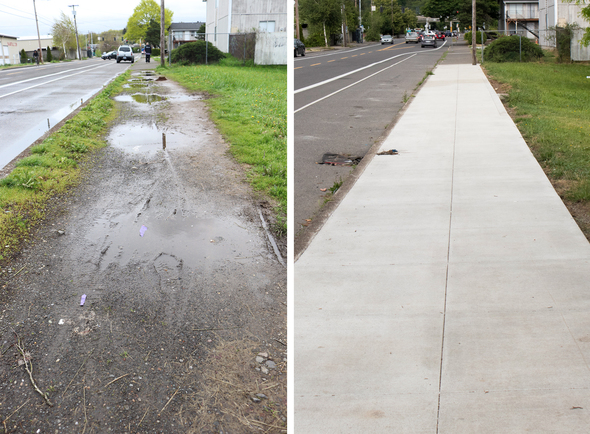 Before and after: Empty segments on SE Flavel Street between SE 84th Avenue and SE 92nd Avenue have been filled with new sidewalks thanks to the Fixing Our Streets Program. Photos by the Portland Bureau of Transportation.

The projects, funded by the Fixing Our Streets program, close critical gaps in sidewalks along SE Flavel Street, NE 102nd Avenue and SE 112th Avenue and add 16 new ADA-compliant curb ramps. By closing the gaps between existing sidewalks, the project creates a full 2.25 miles of streets in East Portland with complete sidewalks on both sides on the street. The result is safer access for neighborhood residents to schools, public transit and work.

The sidewalks were engineered by Emerio Design and constructed by Raimore Construction, both of which are local minority contractors. The estimated cost for the projects was $1.3 million, but final project costs were 33 percent under budget – with the total coming in under $900,000.

"As we promised Portlanders, we're putting their dime to work." said Transportation Commissioner Dan Saltzman. "Thanks to the voter-approved Fixing our Streets program, we're making it easier and safer for people here in East Portland to walk in the neighborhoods, visit local businesses and access the Springwater Corridor."

"These sidewalks have transformed the muddy trails on major thoroughfares that residents have relied on for years and made them into accessible pathways to local businesses, public transit stops and parks," said Leah Treat, director of the Portland Bureau of Transportation. "I am especially pleased that these projects have help us grow our partnership with two local, minority-owned firms in Portland –  Emerio Design and Raimore Construction. They worked swiftly to complete this work with the minimum possible impacts for our neighbors and the traveling public, and at a competitive price."

On NE 102nd, the new sidewalks provide a much-needed safety improvement. 102nd Avenue is one of the most dangerous streets in Portland for pedestrians. PBOT’s Vision Zero Action plan ranks it in among the top 20 streets where pedestrians are killed or injured. The sidewalk provides a seamless walking route between Prescott Elementary and the Gateway Transit Center.

On SE 112th, the new sidewalks improve walking connections along a large north-south corridor and connect destinations like Kelly Butte Natural Area, Floyd Light Middle School and Mall 205. On SE Flavel, new sidewalks make it safer to walk to the MAX Green Line, the I-205 Multiuse Path, the Springwater Corridor as well as shops and restaurants on 82nd Avenue. All three projects were identified in the East Portland in Motion plan as having strong community support but remained unfunded until voters approved Measure 26-173, which created the Fixing Our Streets Program.

Fixing Our Streets projects make up approximately 20 percent of the investments in Portland’s transportation infrastructure this construction season, with a total of approximately $105 million being invested in capital projects, street repair and safety between now and September 2018.

The lane closures will allow crews to grind and pave 4.23 lane miles of pavement.

The traveling public is advised to expect delays while repairs are being made.  We ask the public to travel cautiously, observe all lane closures and directions by reader boards and flaggers, and use alternate routes if possible.

(June 28, 2018) If you are planning to be out-and-about this Fourth of July weekend, the Portland Bureau of Transportation asks that you please make plans to travel safely.

A year ago, Portland experienced a string of deadly traffic crashes around the Fourth of July holiday weekend. Seven people died in six days from June 28 to July 3, 2017.

Four more people died between June 28 and July 3. Three of these deaths involved alcohol impairment and all four took place on Portland's High Crash Network, the 30 corridors that comprise only 8 percent of city streets but account for most of the fatal crashes.

Another common feature: Every one of these deaths was preventable. Tragically, Portland has not had a Fourth of July weekend with zero traffic deaths since 2014.

Please keep these facts in mind this holiday weekend:

Public transit is a great option. Consider using TriMet or Portland Streetcar, especially if you will be drinking alcohol.

The majority of people killed while walking in Portland are legally in a crosswalk. When driving, make sure to stop for people walking at marked and unmarked crosswalks.

Safe speeds save lives. You, your passengers, and everyone on the street around you are safer when you drive at or below the speed limit.

PBOT is working with its Vision Zero Task Force and other community partners to end traffic fatalities and serious injuries. Dispatchers with the Bureau of Emergency Communications take calls about crashes from people directly affected. Law enforcement, fire and EMS responders are often the first on the scene of fatal crashes. Doctors and nurses at Legacy Emanuel Medical Center, a Level 1 trauma center, see the results of traffic crashes firsthand.

“Don’t consume alcohol and operate vehicles,” Dr. Cole said. “Also, everyone needs to stay alert and look out for each other, especially during outdoor events, like fireworks shows.”

More information about Portland’s Vision Zero effort to eliminate traffic deaths and serious injuries by 2025 is available at visionzeroportland.com.

For more information, or to request a presentation to your community group about how to be safe on our streets, email visionzero@portlandoregon.gov

(June 26, 2017) This Thursday will be the start of the Last Thursdays on Alberta street festival on NE Alberta Street, which will close the road to all motor vehicle, bicycle and bus traffic from 6 to 9 p.m., and open it for the popular community event.

The event is on NE Alberta Street, between NE 15th and 30th avenues. The Portland Bureau of Transportation invites all Portland families, artists, and neighbors to enjoy the vibrant street scene and support local businesses and artists.

This year, Last Thursdays on Alberta will celebrate its tradition as a fun, family-friendly showcase of grassroots art and music. Portland is a place where neighbors and friends meet in our streets to enjoy life outside. PBOT is committed to supporting a vibrant and livable city.

Last Thursdays on Alberta is a celebration of grass roots art, food, and culture. This year, there will be new features at the event in partnership with Alberta Art Works and Indigenous Come UP. These features will provide opportunities to make crafts, learn about using salvaged materials at home, and learn about our cultural history.

This year will have some special new features:

Last Thursdays on Alberta is part of PBOT’s Portland in the Streets effort that uses our largest public space - our streets - as a gathering place where neighbors come together, support local businesses and encourage creativity.

People who plan to visit NE Alberta Street this Thursday are encouraged to take public transit, bike, take BIKETOWN, or walk to the area. Attendees are reminded to be courteous to the surrounding neighborhood. Please park with consideration and limit the level of noise when returning home after the event.

Vendors are asked to register at www.lastthurspdx.org.