The Division-Midway Neighborhood Street Plan was adopted by City Council as recommended on Thursday, October 15, 2015.

Thank you to all who testified and sent a letter of support!!

Link to the Division-Midway Neighborhood Street Plan also on the Documents page.

The Project Working Group (PWG) generally endorsed the draft Division-Midway Neighborhood Street Plan with edits at their September 18, 2014 meeting. Many of the recommended edits were incorporated into the final plan completed in the Summer of 2015. In October 2015, PBOT staff will present the recommended plan to City Council for adoption during the public hearing. The public is welcome to testify in person during the hearing or submit written testimony in advance.

Thank you to everyone in the community that contributed to this planning process and development of a recommended plan!!

About the Division-Midway Neighborhood Street Plan

The project area is centered on SE Division Street, a designated “Main Street” in the Metro Region 2040 Growth Concept Plan; and extends from SE 112th to SE 148th avenues and reaches roughly one mile north to SE Stark Street and roughly one mile south to SE Holgate Street. 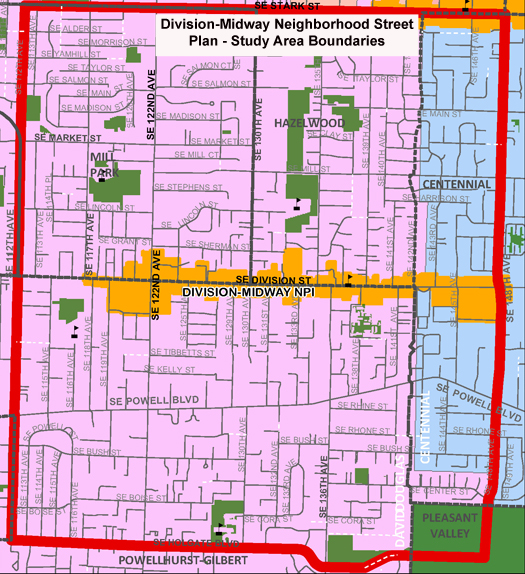 The overall goal is to develop a Neighborhood Street Plan that can better increase street connectivity and multi-modal travel options within the project area. Objectives:

The Street Plan will define the primary active transportation routes, identify new opportunities for street system connections and apply the City of Portland’s recently adopted set of residential “local street” standards through Street By Street. The Street Plan will also identify implementation methods for introducing new street and pathway connections and options for improving deficient local streets. The Street Plan will recommend amendments to the Transportation System Plan, including revisions to street classifications, master street plan and Transportation System Plan project lists. A set of local street improvement options with rough cost estimates will be developed at a concept level. The Street plan will inform both future public Capital Improvement Projects and private development requirements for dedication and frontage improvements.

How is this project funded?

Materials for the project group