The City Council date for the adoption of the Tryon-Stephens Headwaters Neighborhood Street Plan is on:

Staff released a DRAFT version of the Final Plan in early July 2015. 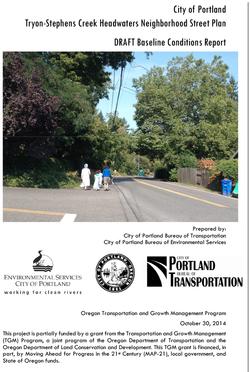 Existing Conditions Report
The purpose of this report is to compile existing conditions, existing policy, and planned improvements to help inform the TSHNSP. This report will document the existing conditions in the TSHNSP study area relating to the transportation networks and the stormwater management systems. The project team analyzed transportation facilities including the pedestrian and bicycle network, missing street connections, and stormwater challenges related to the area’s sensitive natural resources, poorly draining soils, steep topography, and constrained right.of.way. This report will lay the groundwork for the next phases of the planning process, which will identify needs, opportunities, and constraints within the study area and begin to create a range of possible improvements.

Community Involvement Plan
This Community Involvement Plan is the guiding document for conducting community outreach, soliciting citizen participation, and gathering input into the development of the Tryon-Stephens Headwaters Neighborhood Street Plan. The Portland Bureau of Transportation (PBOT) and the Bureau of Environmental Services (BES) will develop the plan between July 2014 and June 2015.

Needs, Oppertunities, & Constraints Memo
The Tryon-Stephens Headwaters Neighborhood Street Plan (TSHNSP) seeks to address the five transportation/stormwater needs listed below. Deficiencies may include known issues with the existing system, a lack of infrastructure, and gaps in existing policies. The following needs were identified based on the findings in the Existing Conditions Report, discussions with BES and PBOT staff, and public feedback compiled to date, including at the SW Sunday Parkways Roll and Stroll event, Community Working Group meeting and other community meetings. Addressing these needs will be the core task in developing local street and stormwater solutions for the TSHNSP. 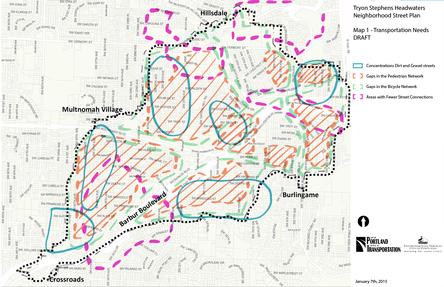 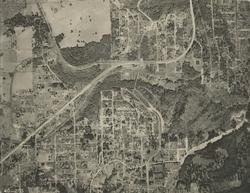 High up aerial view of SW Barbur Blvd. A photo from City Archives looking down on SW Portland.  North is at bottom of image. Date is circa 1940. It shows the Terwilliger Blvd overpass.