For this plan, the community helped identify and prioritize the most beneficial improvements that would make it safer and more convenient to get to the bus or walk and bike to places nearby sections of bus lines 87 (Airport Way), 77 (Halsey), and 20 (Outer Stark-Burnside).

The document is large and so it is separated into 3 PDFs:

Thank you to everyone who attended the hearing, testified in person and sent written testimony or letters! Your voice matters.

If you were unable to attend the City Council hearing, you are still welcome to view the presentation slides online HERE. It includes an update about early implementation achievements.

ABOUT the Growing Transit Communities Plan

Learn about the GTC Plan and planning process by visiting our online story map. Click here and scroll to reveal the story.

What will be the result of this Plan?

The end product will be investment plans –lists of improvements and how much they would cost to implement– for each of the three bus line corridors that are a part of this planning process. The investment plans will address needs identified during the planning process such as pedestrian and bicycle access to transit stops, improvements to specific transit stops themselves, built road treatments that help prioritize transit, and potential recommended policy and programmatic changes that would help get more people riding the bus in these areas.

This planning process itself intends to serve as a process model that can be replicated in other corridors –even corridors in other cities– so
that they too are better able to identify and prioritize improvements that would make getting to and using the bus, a safer and more convenient option.

What is the general planning process and timeline?

Each step of the planning process will be guided with input from a Technical Advisory Committee, Community Advisory Group, and broader public outreach in each corridor to especially including youth, seniors and people with disabilities, people with limited English proficiency, and communities of color. This planning process started in the fall of 2015 and has been extended from summer 2016 to fall 2016. 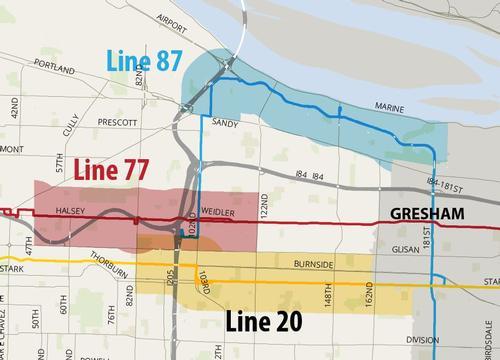 The City of Portland complies with all non‐discrimination, Civil Rights laws including Civil Rights Title VI and ADA Title II. To help ensure equal access to City programs, services and activities, the City of Portland will reasonably modify policies/procedures and provide auxiliary aids/services to persons with disabilities. Call 503-823-5282, TTY 503-823-6868 or Oregon Relay Service: 711 with such requests, or visit http://bit.ly/13EWaCg

Documents and maps for the Growing Transit Communities Plan

Outreach and events for the Growing Transit Communities Plan