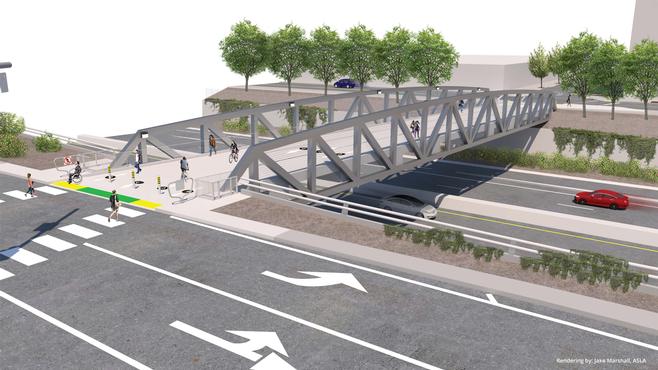 Construction of the Flanders Crossing Bridge kicked off in June 2020. Major construction will begin in July. Early in the project, there will be some minor impacts to traffic and short-term parking. There will also be removal of some trees at the east end of the bridge site at NW Flanders Street and 15th Avenue as well as a nighttime closure of the NW Everett Street on-ramp to I-405.

When complete, Flanders Crossing will be 24-feet wide and stretch 200 feet across I-405, with two-way access for pedestrians and people on bikes. The bridge will serve as a seismic lifeline route in the case of a major earthquake. The project will also include new traffic signals at NW 14th and 16th avenues, and a four-way stop sign at NW 15th Avenue in order to provide access to the bridge from both sides.

NW Flanders Street has long been planned to be to a Neighborhood Greenway route, providing a low-stress, east-west bicycling and walking connection across Northwest Portland, the Pearl District, Old Town and into downtown Portland, with connections to the Steel Bridge and Waterfront Park. Until now it has been difficult for people to walk or bike the short distance to the Central City from Northwest Portland due to the lack of a safe and comfortable crossing of I-405. Pedestrians and people biking are forced to detour to either NW Everett or Glisan streets, both of which lack sidewalks on one side and require negotiating on- and off-ramps for vehicles entering and exiting I-405.