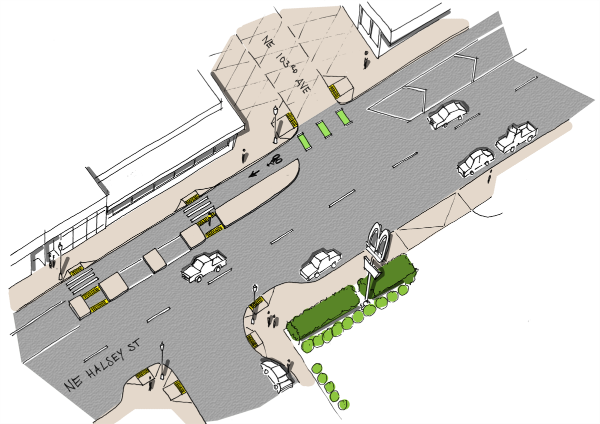 The purpose of the Gateway to Opportunity project is to use streets to connect people to opportunities. Gateway is an area that has been historically underinvested. It is a part of Portland where people have not had safe infrastructure to walk, bike, or take transit. The result of these streets that have been difficult to cross on foot is that they have acted as barriers to opportunity. The Portland Bureau of Transportation’s (PBOT) recent and upcoming safety improvements are aimed at changing that.

The focus area in Gateway will be used to improve livability, create more convenient transit connections, encourage bicycling, and contribute to increased safety. PBOT expects the results of these investments to be improved quality of life and better connections to schools, parks, neighborhood businesses, and public transit.

The funding for these projects will come from a variety of sources including Fixing our Streets funding, Oregon Department of Transportation, City of Portland General Fund, Prosper Portland, and transportation system development charges (TSDCs). TSDCs are fees paid by developers to offset the transportation impacts of new development. 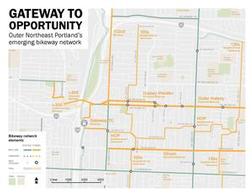 The Gateway to Opportunity focus area is also part of a national effort to develop best practices related to multimodal network connectivity.  In other words, the City is looking at best practices to connect people who are walking, biking, and taking transit through low-stress connections like neighborhood greenways and rapid flashing beacons.

Portland worked with a number of community organizations including East Portland Action Plan’s Land Use & Transportation committee, Friends of Gateway Green, Immigrant and Refugee Community Organization, Oregon Walks, and The Street Trust to put together a proposal centered on how bicycle infrastructure in Gateway would increase access to parks, transit, and employment opportunities.  Portland’s proposal for this national challenge was titled “Gateway to Opportunity” for two reasons.  First, our goal was to highlight that bicycles can be a tool to help people access economic opportunity and second, because the focus area that was chosen in partnership with community stakeholders is in Gateway.

The proposal area boundary is I-205 bike path to the west, I-84 to the north, NE 132nd Ave to the east (the 130’s bikeway), and E. Burnside to the south connecting to Tri-Met’s Blue Line MAX service.  As part of this effort, PBOT is also focusing on key connections for walking and bicycling across I-205 and I-84.

PBOT would like to acknowledge and thank Prosper Portland for its efforts in funding safe transportation infrastructure in Gateway.

Project Completion Dates (as of July 2018) 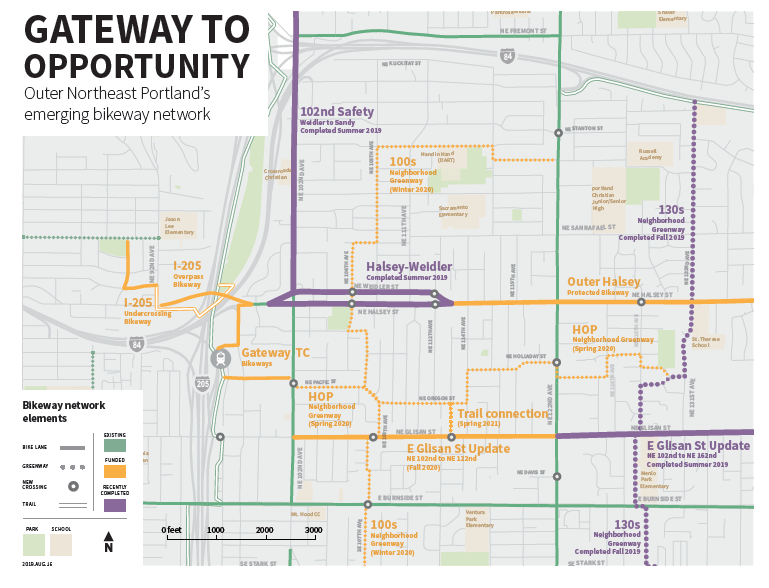 Funding for Gateway to Opportunity projects is provided by Fixing our Streets, Prosper Portland, City General Fund, TSDCs, and the Oregon Dept. of Transportation.

For an interactive map of Fixing Our Streets projects, click here

Questions about the Gateway to Opportunity project?