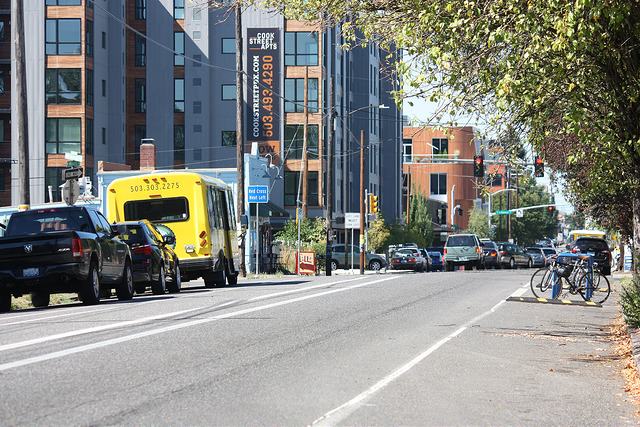 This project will be doing sidewalk infill between 115th Avenue and Parkrose Middle School on the south side of NE Shaver.

There are significant gaps in the City’s greenway network that can discourage Portlanders from riding bikes to work, school, shopping, etc. The Seventies Greenway project will address deficiencies in this corridor.

This project is currently in its design phase, with construction anticipated to begin in Summer 2020.

his project will build over 3000 feet of new sidewalk (the equivalent of 15 downtown city blocks) on the east side of NE 148th from NE Halsey Street to NE Glisan Street.

This project will address safety and traffic flow issues on NE Halsey between 47th and 60th Avenues, widen the sidewalk on NE 60th Avenue between NE Halsey Street and the NE 60th Avenue MAX Station, and construct a segment of the 60s Bikeway.

A series of safety and design changes between NE Flint and 28th that enhance an essential existing link in our low-stress walking and biking network.

PBOT is working with Prosper Portland to design streetscape improvements along N Lombard Street in order to create a safer environment for pedestrians.

A new pedestrian/bicycle bridge over Interstate 84 and the Union Pacific Railroad to better connect the rapidly growing Lloyd and Central Eastside Industrial districts.

Repaving, traffic signal adjustments, curb extensions and pedestrian islands will improve sections of East Burnside from 18th Avenue to Cesar Chavez Boulevard in the summer of 2016.