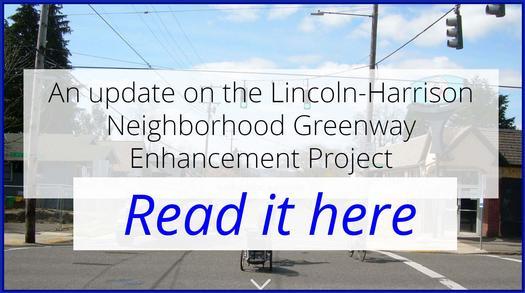 Update to design of 30th and Harrison-Lincoln crosswalk; postponement of 50th and Lincoln interim diverter installation due to Fixing Our Streets summer paving project

In response to feedback received from the community, PBOT has modified the design of the crosswalk’s southwest corner to further tighten the intersection and provide shorter crossings for pedestrians. View the design.

As a result of funding from the Fixing our Streets program, SE 50th is being repaved from SE Division to SE Hawthorne this summer. This project will prevent further pavement deterioration and update corners to meet current accessibility standards. Due to the traffic management and paving plans of the contractor hired to complete this repaving work, the installation of the interim diverter at 50th and Lincoln is being postponed. Read the news bulletin announcement for complete information.

What does success look like at 50th and Lincoln?

The interim traffic diverter on SE 50th at Lincoln is scheduled to be put in place in Summer 2018. Learn more project details in the project’s story map. 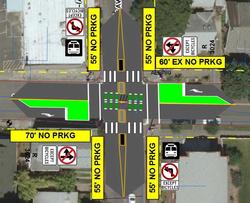 The purpose of diversion at this location is to reduce car traffic volumes on Lincoln, both east and west of 50th, where current traffic volumes exceed acceptable thresholds.

Diversion has been used successfully for a number of years in Portland as a tool for reducing the number of vehicles on neighborhood greenways. On the Lincoln Neighborhood Greenway, the diverters at 20th and at Cesar Chavez continue to function successfully to maintain car volumes within acceptable levels.

-Greenways should be designed, built and maintained for an average of 1,000 vehicles a day, or 50 vehicles per hour in the peak direction.

-While not ideal, a greenway can operate with an average of 1,500 vehicles per day or 75 vehicles per hour in the peak hour.

-Greenways should be improved or maintained to not exceed an average of 2,000 vehicles a day or 100 vehicles per hour in the peak travel direction.

If the diverter does not result in acceptable volume reductions, then additional diversion may be necessary. A diverter at 60th to prevent westbound auto traffic would be considered that allows for transit access.

2. Did traffic diversion from Lincoln create unacceptable conditions on nearby streets? Portland’s Neighborhood Greenways Assessment Report also set guidelines for local service streets near neighborhood greenway traffic calming efforts. As a result of a traffic calming project on a neighborhood greenway, traffic volumes on adjacent local service streets should not exceed 1,000 cars per day or 50 cars per hour during peak demand. If a side street has post-project vehicle volumes above 1,000 daily trips or 50 cars per hour during peak demand, and it did not have a pre-project volume problem, we will do follow-up counts to confirm the change is not random and propose mitigation.

Previous examples of mitigation in Portland

Stop signs reoriented on SE Ash at 13th, 15th, and 18th and on SE Pine at 15th, 16th and 18th south of the diagonal diverter at SE 15th and Ankeny to create a stop plan and reduce incentive to cut through the neighborhood (SE Ankeny Neighborhood Greenway).

Speed bumps installed on SE Woodward between SE 26th and Caesar Chavez Blvd. south of the diverter at 32nd and Clinton to discourage non-local traffic use and reduce speeds (Clinton Neighborhood Greenway).

As the result of an investigation request that originated from a neighborhood resident, the speed zone on SE 50th Ave. from SE Powell Boulevard to SE Hawthorne Boulevard will soon be reduced from 35 miles per hour to 30 miles per hour.

If you have a concern about a currently existing traffic safety issue, please report the details to 503-823-SAFE or PDXreporter: https://pdxreporter.org/

In order to change a speed limit, the Portland Bureau of Transportation sends a request to the Oregon Department of Transportation, who controls speed limits in Oregon. The request and steps involved depend on the type of speed limit being changed. Learn more about the process on the PBOT website.