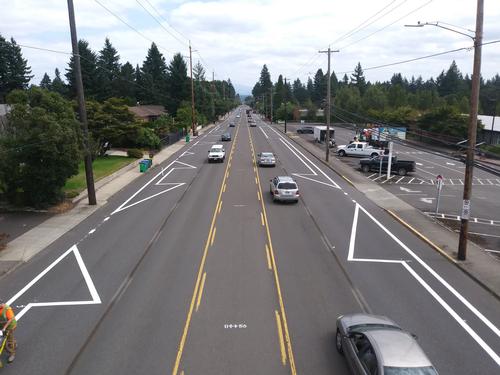 The data is being gathered throughout February, and results will be available this spring.

The aim of the East Glisan Street Update project is to achieve goals articulated by the community and city council relating to improving street safety, providing multimodal options, and improving access to opportunity (access to jobs, parks, libraries, transit, etc.).

The project is divided into two phases:

East Portlanders are at greater risk to be injured or killed in a traffic crash and disproportionately represented in the City’s crash statistics. A person walking in east Portland is 2.3 times more likely to be hit by a motor vehicle than a person walking in inner Portland. This is due to wide streets that have historically prioritized the speed of motor vehicles above everything else, including safety.

Making Glisan Street safer is also part of our effort to improve multimodal options and ensure streets act as ladders of opportunity through a project known as “Gateway to Opportunity”. This three-year project, which began in 2017, is geared toward implementing an integrated bicycle network, creating safer crossings to transit, capitalizing on new park investments, and improving access to jobs in Gateway. More information and a map of our Gateway to Opportunity project area can be found on our website.

In order to address the parts of Glisan with the highest need, PBOT is installing a three-lane street configuration between 105th-119th, 125th-145th, and 150th-160th. PBOT is not changing the existing number of lanes within three blocks of the 102nd and 122nd intersections, thereby keeping a left turn lane and two through lanes on the intersection approaches. As part of the reconfiguration, bike lanes will be installed from NE 102nd Avenue to NE 162nd Avenue.

For questions about this project, please feel free to contact Timur Ender at Timur.Ender@PortlandOregon.gov