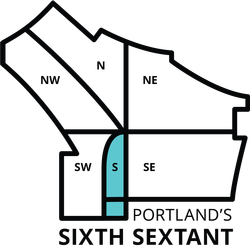 The Portland Bureau of Transportation collaborated with Portland Fire & Rescue, the Portland Police Bureau and Multnomah County to improve wayfinding, 9-1-1 dispatching and emergency response in the former area of Southwest Portland east of SW Naito Parkway and SW View Point Terrace. Due to the eastward curvature in the Willamette River, east-west addresses in this area were previously addressed with a leading zero address to differentiate them from addresses west of this dividing line. About 8% of Southwest Portland addresses prior to the creation of South Portland were in this leading zero addressing area.  This area has been readdressed as South Portland on May 1, 2020 per City Council approval on June 6, 2018.  Final property owner reminder notification letters were mailed on April 20, 2020 and final tenant reminder notification letters were mailed on April 21, 2020 concluding the public notification process.

Portland Fire & Rescue (PF&R) staff and Portland Bureau of Transportation (PBOT) staff were directed to implement a solution to eliminate this issue, including for unincorporated Multnomah County areas served by the City. Wayfinding, 9-1-1 dispatching and emergency response issues increased each year as development and population growth occurred in the former leading zero addressing area, especially in South Waterfront.