Several capital projects in and near the Cully neighborhood are in the development (pre-design) and design phases, while others are nearing construction. This webpage and linked interactive map are meant to provide Cully residents with current information about these projects, along with associated contact information for questions and comments. 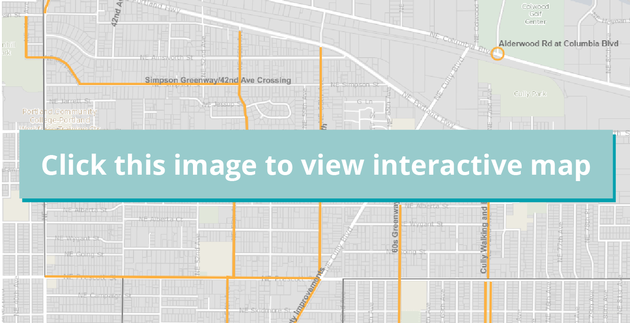 There are significant gaps in the City’s bikeway network that can discourage Portlanders from riding bikes to work, school, shopping, etc. The Seventies Greenway project will address deficiencies in this corridor.

This project will infill all sidewalk gaps on NE Prescott and on NE Killingsworth (between 42nd and Cully).

The Cully segment of the 50s Greenway will improve walking and biking conditions between NE Mason Street and NE Portland Highway.

This project will add a new neighborhood greenway on NE 41st Ave from Holman to Simpson Ct, Simpson Ct from 41st to Simpson St, and Simpson St from Simpson Ct to 55th. Connecting the existing Holman and the upcoming 50s Greenways in Cully.

The 60s Greenway in Cully will add a northern segment of the recently completed 70s Greenway segment that currently ends at NE Klickitat Street.

This project enhances the existing bike lanes on NE Cully Boulevard between NE Failing and NE Prescott Street. The bike lane and on-street parking will be reconfigured to add parking protection for people riding bikes.

The goal of this project (still in the early development phase) is to provide a high-quality pedestrian and bicycle parkway along NE 72nd Ave through the heart of Cully.

Rebuilding the bridge over NE Lombard Street that is vulnerable to a seismic event and is on a recommended Emergency Transportation Route as well as filling the gap between the Holman neighborhood greenway and upcoming 47th Ave protected bikeway.

This project will build operational and safety enhancements to the intersection of NE Alderwood Road at Columbia Boulevard.