UPDATE (2/27/2020): Post-project data collection is complete. Click here to see all of the before and after data for the project area. 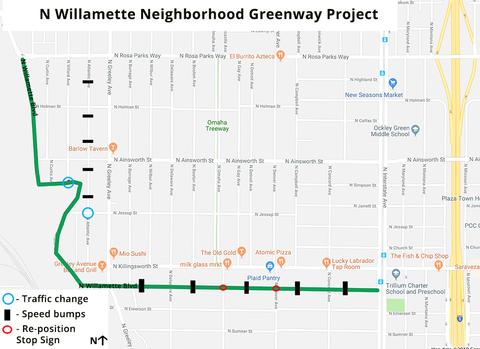 People driving on N Curtis, N Villard, N Atlantic, and N Willamette to avoid busier main streets has been increasing for several years. Community members have increasingly asked for solutions to the high volume of cars speeding down their typically quiet, calm streets.

PBOT collected traffic data and found the speed and volume of people driving is impacting the local street network and creating unsafe conditions.

The N Willamette Neighborhood Greenway project will create a new, low-stress bikeway on a key connection on the peninsula and improve residential streets by instituting traffic diversion and calming measures in key locations.

Before and After Project Data

Traffic volumes and speeds before and after project construction.

Depicts all of the locations where post-construction data on automobile volumes and speeds will be collected.