PBOT is partnering with TriMet, Metro, Portland Streetcar and Portland State University (PSU) to install and experiment with red pavement markings in transit priority lanes. We are testing to see if adding red on the pavement helps increase driver understanding and compliance in transit priority lanes. PSU will help us collect before and after data and evaluate performance.

The Federal Highway Administration (FHWA) has given permission to a number of U.S. cities, including Portland, to participate in a national experiment to use red paint to signal to other road users that buses, streetcars, and trains have priority.  Our application request to experiment was approved by FHWA in September 2019.

What are red transit lanes?

Red transit lanes are lanes where transit has priority and other road users are either prohibited or allowed limited access.

When and Where: In what locations might I expect to see red pavement markings?

The map below displays the locations included in the FHWA experiment with red and what year installation is anticipated. 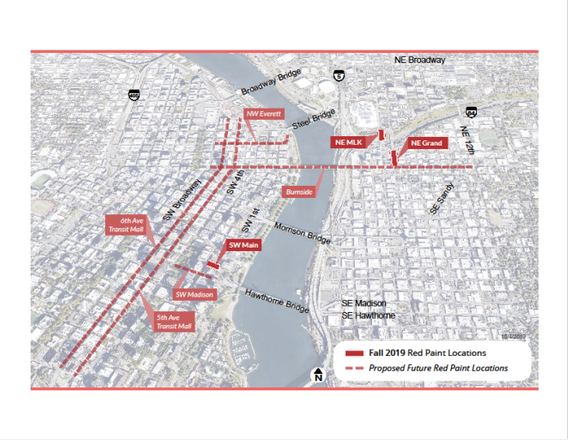 In November 2019, we made our first three installations of red pavement markings at the following locations: 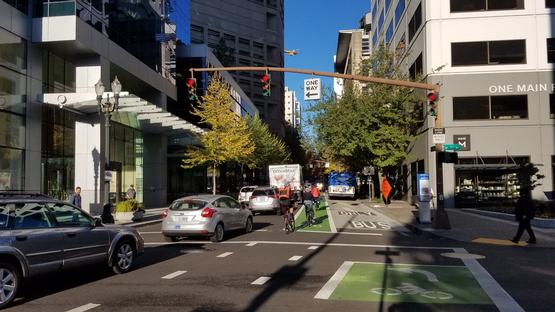 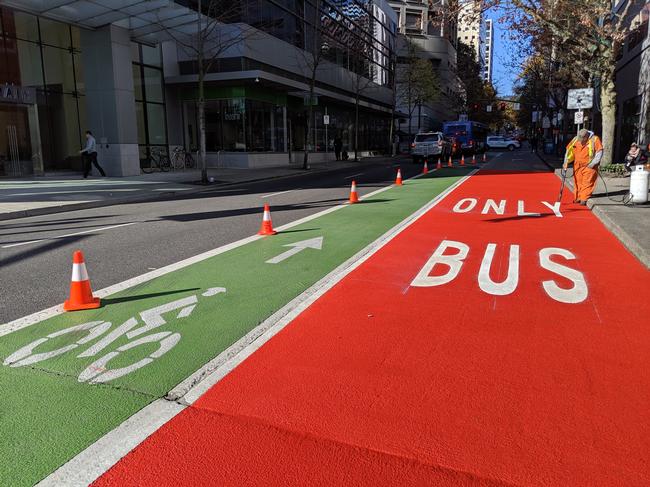 The exact design of red pavement markings may vary from location to location, depending upon the context and whether the lane is strictly transit only or if other drivers are allowed limited use of the lane to access local businesses, on-street parking or turn right at the next intersection. Some examples of potential use of red are illustrated below.

Why is this part of a FHWA experiment?

Use of red in transit priority lanes is considered an experimental treatment because it is not yet included in the Manual on Uniform Traffic Control Devices (MUTCD). The MUTCD contains the national standards governing all traffic control devices. The MUTCD sets minimum standards, provides guidance, and ensures uniformity of traffic control devices within the United States. There is currently no official guidance or standards in the MUTCD regarding the use of red colored pavement to designate transit priority. However, agencies across the country have successfully implemented of transit priority lanes with red by participating in the FHWA Experimentations Program. Often, experimentation programs lead to formal action on ideas or proposals.

The MUTCD Experimentations Program through the FHWA allows jurisdictions, roadway authorities, and transportation agencies to experiment with new traffic control devices or different applications of existing devices that are not compliant or included in the MUTCD. Jurisdictions must apply to the program to be eligible to participate and be able to demonstration that experimental treatments improve road user safety or operations.

Other cities that are experimenting with this new tool, have helped make bus service more efficient by decreasing conflicts between buses and other road users. Some of the cities deploying red transit lanes include: Seattle, San Francisco, New York City, Minneapolis, Pittsburgh and Denver. 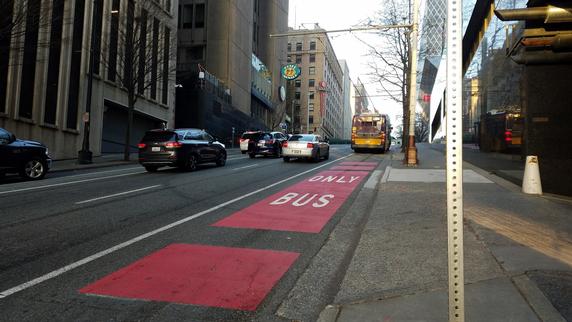