The majority of Portland has 200 x 200 foot blocks, whereas most other American cities have much larger block patterns.
Some Portland history indicates blocks were made at the 200 feet scale to create a pedestrian friendly downtown.  The more widely accepted version says is it was done to create more highly valued corner lots for businesses, with the positive side effect being a pedestrian friendly downtown.
Shorter blocks mean more places for pedestrians to cross and a smaller, more connected feeling for the walker, both of which encourage more pedestrian movement.
Try it out!  Walk into downtown one day or try running your errands via foot.  Then come back here and tell us about your trip. 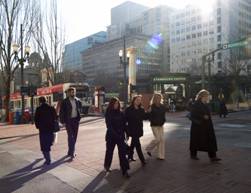 Walking Portland, Did you know…
Courtesy of Ellen Vanderslice
*There are 30,027 blocks in the City of Portland. (Portland Pedestrian Master Plan)
*Portland has 165 public staircases, with about 9,000 public stair steps. (Portland’s Little  Red Book of Stairs by Stefan Young)
*In 1994, Portland became the first city in the U.S. to undertake a comprehensive Pedestrian Master Plan, adopted Earth Day 1998.
Walking Tip:  To get a walk signal at every block, walk briskly in the OPPOSITE direction from one-way traffic flow.
Posted by Laurie Miskimins