To commerate National Bike Month we're digging into our archives. Here's an article from May 2008:

National Bike Month got off to a great start here in Portland.  To kick off the month the Portland Bureau of Transportation set up a friendly bike/car race from 18th and NE Broadway to City Hall.  Two of Portland's favorite brewers stepped up to the challenge - Rob Widmer took to two wheels and his brother Kurt donned his racing gloves as he stepped into his sleek sedan.

Who could make the 3 mile morning commute to City Hall fastest? 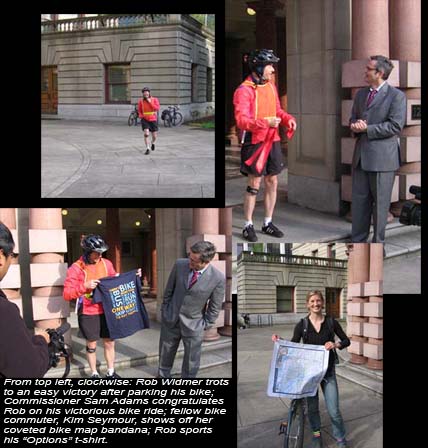 Rob proved just how convenient bike commuting is here in Portland.  Following the same basic route as Kurt, Rob pedaled his bike to the finish line a full 5 minutes before his brother!  Commissioner (now Mayor) Sam Adams waited to greet the contestants and congratulate Rob on his pedal power prowess!

But wait!  Who is this coming in just 2 minutes after Kurt?  It's Kim Seymour, from David Evans and Associates.  Rather than take the bike lane on Broadway Kim took our challenge by riding the NE Tillamook Bike Boulevard and cruised along the Watefront Bike Path.  Taking in the sights on a low- and no-traffic route meant just an extra 2 minutes for Kim!  Wow!  Plus no search for parking, no fighting traffic, no gas pump sticker shock - just a pleasant morning pedal along the river to work.

Click the links to see the Broadway Bike Lane Route and the Tillamook Bike Boulevard Route.