During the week of October 13, crews for the Portland Mall project will be excavating, reconstructing and paving SW Jefferson, Columbia and Clay streets between 5th and 6th avenues.  One lane will be closed at a time while the roadway is excavated and reconstructed.  Monday the crews will be excavating between 5th and 6th on the north side of Clay and Columbia and the south side of Jefferson.  Tuesday they will pave these areas.  Wednesday they will excavate the opposite sides of the street and pave the areas back the same day.  Work hours will be between 7:00 a.m. and 3:00 p.m. each day.

Street closures planned over the weekend

On Saturday, October 11, there will be two closures to set cranes to lift to adjacent construction projects.  One will be SW Park Avenue between Yamhill and Morrison, from 6:30 a.m. until 2:00 p.m.  The other will be on NW Glisan (westbound) between NW 3rd and 4th avenues, beginning at 7:00 a.m. on Saturday the 11th and continuing until 6:00 p.m. on Sunday, October 12.  Also on Saturday and Sunday, October 11 and 12, SW 2nd Ave between Market and Clay streets will be closed each day from 7:00 a.m. until 4:00 p.m., for roof repairs to Keller Auditorium.  The west sidewalk of SW 2nd also will be closed to pedestrians. 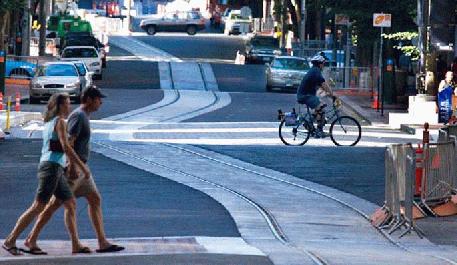 Pavement crews from Multnomah County will be crack sealing the pavement on the Main Street ramp at the west end of the Hawthorne Bridge, most likely on Thursday, October 16, although the date could change due to weather.  Work will take place after 9:00 a.m. and end before 3:00 p.m.  Only one travel lane will be open on the ramp during the work.  To move traffic more smoothly, a flagger will be stationed at the intersection of SW Main and 1st, and the signal will be turned off.

Loo, loo, skip to my loo

Work is expected to begin during the week of October 13 on a new public loo to be located on NW Glisan at 5th Avenue.  The new loo will be placed in a curb extension to be constructed in the current pull-out area on the north side of NW 5th.  Some sidewalk restrictions and intermittent right lane closures may be needed for the construction.

More than 10,000 walkers will come together on Sunday, October 12 at 9:00 a.m. in Pioneer Courthouse Square for AIDS Walk Portland, with the goal of raising $350,000 for services provided by Cascade AIDS Project to prevent new HIV infections, care for people affected and infected by HIV/AIDS, educate communities to eliminate stigma and shame and advocate for immediate action in combating the pandemic.  Beginning at 10:00 a.m., Portland police will escort the walkers from Pioneer Square to Waterfront Park via Broadway and Salmon Street; after that, walkers are on paths or sidewalks.  The event ends at noon.