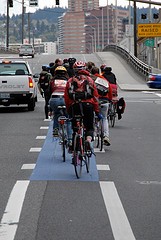 Portland transportation planners have often employed the phrase, "Build It and They Will Come" to explain their approach to building a bicycling infrastructure from scratch in the early 1990s when there appeared to be limited demand.

Some 15 years later it is easy to see their logic.  The City did indeed build a vast network of bicycling facilities - bike lanes, off-street paths, and bike boulevards (low-traffic streets that give bikes priority) - and cyclists have come in droves.

Two recent articles are showing that the-build-it-and-they-will-come theory may also hold true in other cities, as well.  The New York Times is reporting a 35% increase in bike commuting between 2007 and 2008 in New York City!  Not surprisingly, the city added 140 miles of bike routes since 2007.

Similarly, the Denver Post is reporting another phenomenon related to transportation infrastructure.  According to the article, home values near light rail lines in Denver, St. Louis, and San Diego are increasing, while real estate prices throughout the rest of those regions head south.  The article points to the developments occurring near the light rail lines, not simply the light rail itself, as an important driver of real estate values.