Commuter Central is introducing a new series of articles about great places to ride your bike in Portland.

This week, we are starting with one of our favorite trails (and one of your favorties too, judging by the number of people we share the path with when we're out there).  The Springwater Corridor.

This 18 mile-long beauty stretches from the east bank of the Willamette River all the way to the distant burg of Boring, OR.  The trail passes through wetlands, farms, residential areas, and some of the region's biggest parks.  The whole trail is nice and flat and its paved for the first 18 miles before turning to hard-packed gravel farther east past Gresham.

Recently, the trail received some significant upgrades.  The "three bridges project" allowed the trail to continue over three barriers, the Union Pacific railroad, Johnson Creek, and McLoughlin Blvd.  In addition, the trail is slated to receive a new (and much needed) re-paving within the City of Portland.

We are lucky to have such a great trail.  And we owe our good fortune, in part, to the old inter-urban streetcars.  The Springwater Trail was originally an inter-urban rail line from Sellwood to points east.  At one point it strected all the way past Eagle Creek and Estacada to the dam at Cazadero!  As was common during the rise of inter-rban rail systems, the rail company built Oak Amusement Park as a way to attract riders on the evenings and weekends.

The Springwater Line stopped carrying passengers in 1958 and the entire rail infrastructure was removed in 1989.  The Oregon Department of Transportation acquired the right-of-way and transferred the rights to the City of Portland.  In 1996 the trail opened in Portland.  Since that time, Metro and the cities of Portland,  Gresham and Milwaukie have worked to add more sections and upgrade the trail.

A vision exists to extend the trail all the way to the Mt. Hood National Forest and the Pacific Crest Trail.  That would be quite a bike ride! 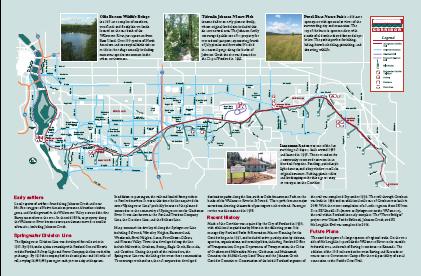