Last week I made an egregious error when I referred to super commuter, Bonnie Nicholas, as a "sometimes bike commuter" in a blog post.  Bonnie, who works in the Signals and Streetlighting division here at PBOT, is a regular bike commuter who rides about 6 miles (one way) just about everyday from her home in Northeast Portland. 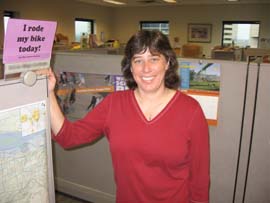 I met Bonnie two years ago at a downtown PBOT celebration of the Bike Commute Challenge.  She told me how she had just started bike commuting during the summer and was enjoying it (although disappointed that she hadn't lost a single pound:).  Before working downtown, Bonnie worked for PBOT's Maintenance Operations division and occassionally commuted by bicycle to the North Interstate area.  But her two-wheeler weighed 100 pounds and the wind seemed to blow from the west in the mornings and the east in the evenings.  Her bike commute was kind of a bummer.

After moving to the downtown office and bussing it for a while, Bonnie decided she wanted to start bike commuting again.  When I asked what inspired her, Bonnie said that seeing all of the cyclists streaming into downtown and into PBOT gave her that last bit of motivation.  But first she needed a new bike, and as she waited for Bike Gallery's big April sale to score a deal she broke her foot!  That set the timetable back just far enough for Bonnie to wait for Bike Gallery's big August sale.  And it's all downhill from there...Keep up the good commute, Bonnie!