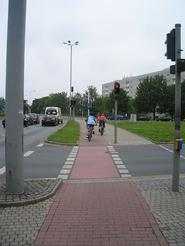 Come and test ride the new Cycle Track on Southwest Broadway from Clay to Jackson. Mayor Adams will be conducting a news conference and official opening of the City’s first Cycle Track on SW Broadway – and we want Portland’s cyclists to try out the new facility and provide feedback to Transportation on what works and what doesn’t.

Where: SW Broadway from SW Clay to SW Jackson