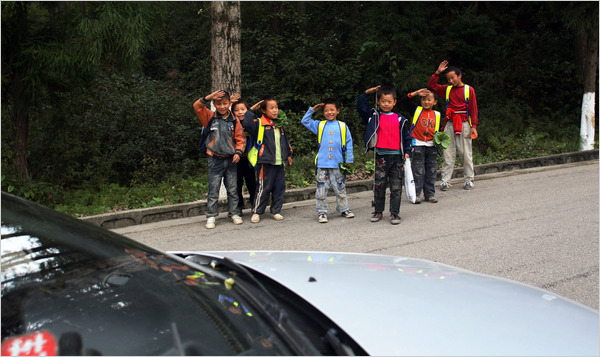 My colleague Timo suggested this inexpensive alternative to our engineering improvements around schools (as reported in the New York Times)...

Salute All Cars, Kids. It’s a Rule in China.

HUANGPING, China — All the students at Luolang Elementary School, a yellow-and-orange concrete structure off a winding mountain road in southern China, know the key rules: Do not run in the halls. Take your seat before the bell rings. Raise your hand to ask a question.

And oh, yes: Salute every passing car on your way to and from school.

Education officials promoted the saluting edict to reduce traffic accidents and teach children courtesy. Critics, who have posted thousands of negative comments about the policy on China’s electronic bulletin boards, beg to differ. “This is just pitiful,” wrote one in a post last year. Only inept officials would burden children with such a requirement rather than install speed bumps, others insisted.

Read the rest of the article on the New York Times website.