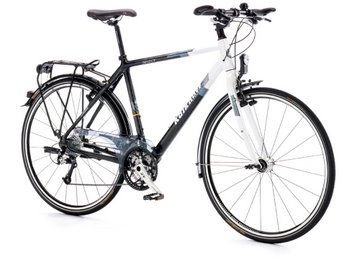 When I met with a CEO of a Dutch bike company this summer, he spoke enthusiastically about e-bikes ability to increase the number of trips taken by bike and to introduce new people to biking for transportation.

Even in Holland, the most bike-friendly country in the world, e-bikes are seen as transformational.

While they expand the market of cyclists and look cool, e-bikes still need to overcome some resistance from within the bike community. When I had the flu last spring, I borrowed an e-bike to help me return to bike commuting.

While I receive a couple of sneers from fully human-powered cyclists, the e-bike was great. In my weakend immune state, I could still surmount the steep N Interstate hill on my way home to Kenton.

Without it, it would have taken an additional two weeks before I could have commuted by bike.

Artic blast
That's what I always get with the new trains.
I literally shiver when I see those beautiful sleek trains coming down the rail because the air is blasting to the point of blowing my paper AND my hair. Please turn down the air!
thanks for letting me 'air' this.
Marlena

I've been commuting on an ebike for almost 9 months now and love it! I'm not displacing a fully-human powered commuter, I'm displacing a car.

PDXebiker, that's great to hear that you're commuting by e-bike instead of driving!

PDXebiker - Commuter Central (and its loyal legion of readers) would love to hear about your switch from driving to ebiking. Would you email me off-line and perhaps we could do a little article about your commute? Thanks! Scott (scott.cohen@pdxtrans.org)

The trend of electric bikes are mostly in the developed country.
In developing country <a href="https://infotainmentbeats.com/best-electric-bikes-under-1000/">Electric bike!</a>petrol bikes are run. I am prefer to use electric bikes because they are environment friendly.