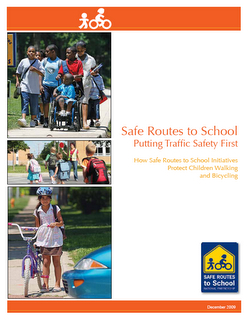 In 2003, the Portland Bureau of Transportation initiated the Community and School Traffic Safety Partnership to respond to strong public demand for services that protect neighborhoods from traffic and create a safe environment for all modes of travel.  The Partnership oversees Portland’s robust Safe Routes to School program, which serves 85 percent of the city’s public elementary schools. Vestal Elementary, located on 82nd Avenue in Northeast Portland, was selected for Safe Routes to School improvements because 82nd Avenue has a high rate of crashes, injuries and fatalities compared to other Portland streets. The City of Portland used approximately $97,000 in city funds to install refuge islands in crosswalks, remove parking near sidewalks and install traffic diverters to prevent motorists from driving the wrong way on a one-way street. The Portland Police Bureau also performed targeted enforcement near Vestal Elementary to ticket drivers speeding in school zones.

The infrastructure improvements and educational efforts at Vestal have been strong and successful along 82nd Avenue. An Oregon Department of Transportation crash analysis from 1998 to 2007 shows a steady decrease in crashes. For example, total crashes decreased by nearly 25 percent and there was a 32 percent decline in pedestrian injuries. Parents have also steadily become more comfortable about having their children walk and bicycle to Vestal.

“Student safety is a top priority for the Portland Bureau of Transportation and it’s always encouraging to hear positive feedback nationally. This report shows what can happen when groups like Safe Routes to School, ODOT, Portland Police and Transportation get together and decide to make the streets around a school safe for kids,” Mayor of Portland Sam Adams said. 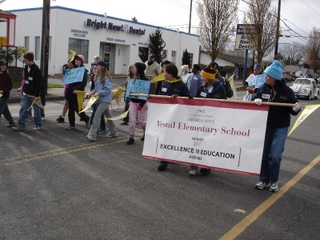 In 2007, an estimated 14,000 children ages 14 and under in the United States were injured as pedestrians, while more than 300 children were killed while walking.  In 2008, an estimated 52,000 bicyclists were injured in motor vehicle crashes, and 21 percent of those bicyclists—nearly 11,000 children—were age 14 or younger.  Children walking and bicycling to school represent 11 percent of injuries and fatalities during the school commute, but just 14 percent of trips and less than two percent of miles traveled.

Congress launched the Safe Routes to School program in 2005 through the federal transportation bill and provided $612 million for five years of state-level implementation of programs that build sidewalks, bike lanes, and pathways, while also providing funding for education, promotion and law enforcement programs.  Federal Safe Routes to School funds are educating children on safe bicycle and pedestrian practices, increasing traffic enforcement to improve adherence to traffic laws and speed limits, and making infrastructure improvements to create safe places for children to walk and bicycle.

Deb Hubsmith, Director of the Safe Routes to School National Partnership noted, “Vestal Elementary school’s success story is a wonderful example of the power and promise of Safe Routes to School to help communities all across the country in addressing traffic safety risks and improve conditions for students walking and bicycling to school.”

The report can be viewed at www.saferoutespartnership.org.

Portland, Oregon's Safe Routes to School (SR2S) is a coalition-led program that brings transportation together in partnership with our schools, neighborhoods, and community organizations to encourage students & families to get to and from school in ways that reduce traffic, increase safety, build strong bodies & clear minds, and provide a cleaner environment. For more information visit www.saferoutesportland.org.

The Safe Routes to School National Partnership, hosted by the non-profit Bikes Belong Foundation, is a network of more than 400 nonprofit organizations, government agencies, schools, and professionals working together to advance the Safe Routes to School movement in the United States. The Partnership focuses on building partnerships, changing policies, advancing legislation, and improving the built environment.