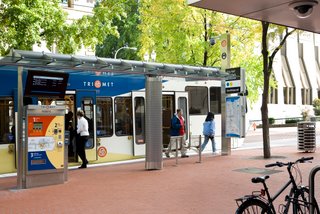 Do you have any transit tricks that make your riding experience more pleasant and convenient?

I came onto my transit trick through one of our SmartTrips Business partners, Standard Insurance Sustainability Coordinator Carrie Farrar.

During December's cold snap I decided to ride TriMet instead of biking to work. Running late, I missed my #8 bus home. I saw on TriMet's awesome stop monitors on the Portland Transit Mall that the next bus was another 16 minutes, which was only a problem with temperatures in the mid-20's.

I noticed that the #9 arrived in a couple of minutes, and even though it involved an 11-block walk home, it seemed better than standing in the cold.

Upon the #9, I ran into Carrie and we chatted about this and that. As we approached NE Weidler and 15th, Carrie suggested I get off and catch the #8 at NE Broadway and 15th.

What sagacious advice! The #9 stops less frequently in inner NE Portland, so I was able to catch the #8 bus that I missed downtown.  Thank you Carrie.

Whether it's transit, carpooling, walking or biking - we'd love to hear your tricks for the commute.

I ride by bike pretty much year round (okay, I admit I don't ride as much in the rain). But I do ride when the weather gets cold. I had a real problem with my eyes watering in the cold weather, then my nose would start to run. I alleviated the problem when I found a pair of "Onion Goggles" at a kitchen supply store. The goggles are designed with "weatherstripping" that fits nicely right against your face to keep onion juices out of your eyes when you slice them. They work extremely well for keeping cold air out too. The added bonus is that it also keeps your nose from running.

My other cold weather trick is when it gets so cold that my riding gloves don't keep my hands warm, I pull out my ski glovess. They keep my hands toasty warm even in the most severe cold.