I spent my Spring Break on a 2-1/2 week trip in mainland China.  It's my third trip over the past ten years.  This trip I accompanied nine 5th-grade students from Portland's International School.  Our students have completed eight years of immersion studies in Mandarin Chinese. They attended a week of school in Suzhou, then followed up with sightseeing in Shanghai, Xi'An, Chengdu, and Beijing.  Which brings me to my commuter-related stories. 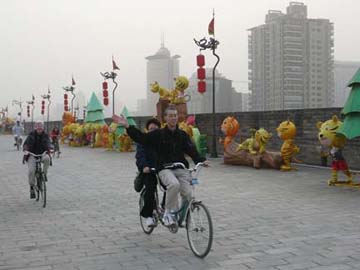 Story One:  We rented bikes and circumnavigated the Ancient City Wall of Xi'An.  Built between  618-907, the 13.7 km (8.2 mile) wall stands 40 feet tall and is 50 feet wide on top. We rode past the four main gates--Chang Le (meaning eternal joy) in the east, An Ding (harmony peace) in the west, Yong Ning (eternal peace) in the south, and An Yuan (forever harmony) in the north.  Of nine families, I won't say who completed the wall circuit first, but let's just say it is a mom-daughter team who often ride their tandem to The International School!

Story two:  Not so positive as story one.  In Beijing 10 years ago we saw literally millions of bicycles.  It was a definite acquired pedestrian skill to cross the street between bicycles, which were used for commuting as well as transportation of goods.  Sadly, today nearly all bicycles have been replaced by automobiles.  Crossing a street has now become a major life-threatening action!  There are some 6 million cars on the road, making Beijing basically one big parking lot.  But the upside is that riding a bike or even walking is often faster than driving.  So maybe the Chinese will figure out relatively soon the benefits of encouraging once again a bicycle-riding population.

Yesterday we returned home, and today I rode my bike to work.  It was a lovely ride crossing the Steel Bridge and rolling into downtown via the Waterfront path.  I saw many of the cycle-commuters I pass everyday.  It's wonderful to be home!