What is a bike box?

A bike box is a green pavement marking installed at intersections to reduce conflicts between people bicycling and driving. It is a green box on the road with a white bicycle symbol inside. It includes green bicycle lanes approaching and leading from the box.

People bicycling can stop in the green box to wait for a green signal. People driving wait behind the green box for the signal to turn green.

At a bike box people driving can not make a right turn on a red signal. 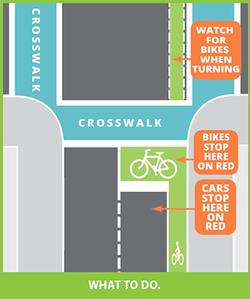 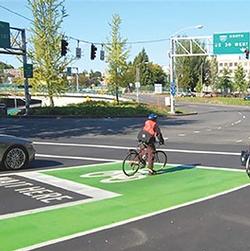 Why are bike boxes being installed?

The main goal is to prevent collisions between people in cars turning right and people on bikes going straight by increasing visibility and awareness. At a red light, people biking are more visible to people driving by being in front of them. At a green light, the green bike lane through the intersection reminds motorists and cyclists to watch for each other.

The bike box design also allows people bicycling to clear the intersection quickly by moving forward as a group.  This may reduce the amount of time a person driving will need to wait to turn right, compared with a standard intersection where people on bikes wait (and move forward on the green) single-file in the bike lane.

Watch this short video to see how drivers and cyclists can use the Bike Box to reduce conflict and increase safety.