The Broadway Bridge is getting a big makeover - streetcar will soon whisk people from the Pearl to the Lloyd District in minutes (slated to open in late 2011).  In the meantime, all us commuters are down one bridge. For updates on bridge construction, check PortlandStreetcar.org

So what's a commuter to do? If you're on transit sit back and relax, TriMet's got it all figured out for you.  If you're driving, you're on the Fremont or one of the arterial bridges to the south.  But what if you're walking or biking? 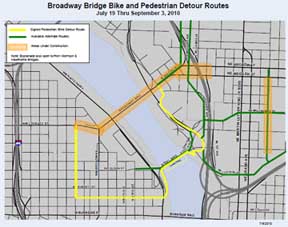 When you're on foot or two wheels a detour is more than an inconvenience, it can be a major roadblock (pun intended, zing!) for your commute.  Luckily we've got several good bridge options for you to get back and forth across the ol' Willamette.

How nice is the lower deck of the Steel Bridge for walking and biking?  Love it!  It does tend to get crowded on beautiful summer afternoons at commute times, but the view is worth a little congestion.  On the east side the Steel Bridge gives you easy access to N Interstate Ave, the Rose Quarter Transit Center, Oregon Convention Center, and Broadway, Weidler, and Tillamook - three major east/west bike connections.  On the west side the terminus is the north end of Tom McCall Waterfront Path.

The Morrison has a brand spanking new bicycle and pedestrian path.  It's wide, smooth, and (so far) lightly used.  Access the path on the east side at SE Water and SE Yamhill.  On the west side human-powered commuters can hop on by heading east on Alder or just off Naito Pkwy at Morrison St.

Since the path is new, not nearly as many people use it as the Steel Bridge.  Check it out!  It's a quiet, peaceful ride.

You know 'em, you love 'em.  Okay maybe not love.  But they work very well.  Want to avoid the bike/walk commuting masses?  Try the Burnside...