If you happen to even occasionally commute by bike or to downtown from the east side, you are familiar with the pleasant crush of bicycle and pedestrian traffic on the Steel and Hawthorne Bridges.  Although the crowd slows one down, there is something wonderful traveling among so many Portlanders getting around my human power.

If you're feeling in a more solitary mood or are looking to freshen up your commute, consider the Morrison Bridge. Let me highlight its assets: 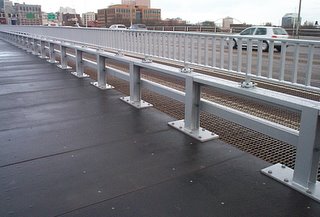 Traveling east from downtown, you can access the Morrison Bridge at SW Alder at 2nd Avenue or from SW Naito Boulevard between Alder and Morrison (it's easier to see from our downtown bike map).

Once you cross the river and SE Belmont at Water Avenue, you can either take Water Avenue, which has a bike lane, or if you're planning to go directly east, travel one block south to SE Taylor, a low traffic bikeway with signals for crossing MLK and Grand.

Although I've commuted via the Morrison from my home in NE Portland, it is a more convenient choice for who live or work south of I-84.

If you want to try the Morrison but aren't sure about your route, email us for a free bike route plan.

I sure would like to use the Morrison Bridge more often on my bike, however when crossing from the West side to the East, the stop at the middle of an uphill grade to wait for car traffic (unlike the Hawthorne, where traffic must stop and look) makes this a less-favored and therefore less traveled option for me.

I'd ride the Morrison Bridge more frequently if the start and end points were better designed. Both the East and West ends of the Bridge are major risk points, brought on by the requirement that the path be two-way. On the West side, it leads to a dangerous crossover, as the Westbound traffic is directed down the ramp to Naito, while the Eastbound traffic must come up from Alder, cross a lane of prioritized car traffic, and immediately negotiate around oncoming bike traffic to get over to the right side of the path. Similar conditions exist on the East side, where some bikes want to exit next to the Morrison Bridge car offramp, and some come down by the I-5 exit ramp intersection, while Westbound bike traffic filters through every which way. Better design will lead to more usage.

I use the Morrison often because it is the most direct route to some of my eastside destinations, but I dislike it for several reasons:

Resolving these design flaws is more likely than encouragement to draw more bike traffic to the Morrison!

I don't use the Morrison bridge often because, as others have stated, it doesn't really get me to where I am going.

Beyond design fixes to the bridge, the bikeway connection between the SE Industrial area where the Morrison drops bikes off and N Williams (via the Rose Quarter) is very poor. This connection needs to be improved (world-class, please?) to ease up the congestion we experience now on the Eastbank Esplanade.

Quick & cheap short-term improvements could include: Sign a bike route from the Morrison to the MLK bridge over I-5, stripe a 2-way MUP over the bridge-deck sidewalk that connects to the MUP (not well signed/striped currently) around the Rose Quarter which transitions you to to the scramble crossing at the Steel bridge. These types of small improvements would make the bridge a more favorable commuting option.

Thanks for sharing your experience..