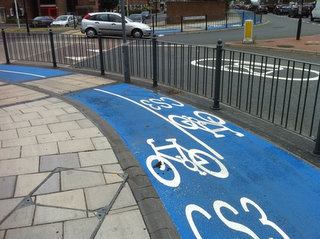 While some London bike advocates have diplomatically described the cycle superhighways as a work in progress (the two-way track is less than 5' wide), the superhighways are an exciting development in one of the world's premier cities.

For Londoners not familiar with biking in the city's medieval web of streets, the cycle superhighways seek to provide a clear, unambigous route for riders to reach major destinations within London. The route pavement is colored blue to easily distinguish the route, while the length of the superhighways (up to 9 miles) simplifies route planning.

Although ideally these superhighways would occur on separated facilities, London has only found space for "cycletrack" facilities on a small portion of the routes. In many places, the superhighway is a bicycle lane adjacent to automobile traffic.

In conjunction with the unveiling of the first two of 12 planned cycle superhighways, Transport for London has kicked off a huge bicycling marketing campaign. The ads highlight the fun, stress-reducing elements of bike commuting. It also highlights how biking is a great way for even long-time Londoners to discover their enormous city. 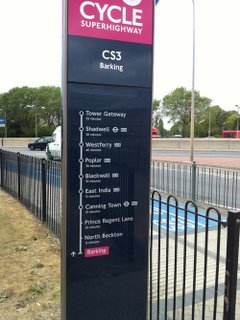 In the absence of a lot of abandonded railroad right of way to create a large off-street network (Minneapolis, we are envious of your largesse), both the neighborhood greenways and cycle superhighways aim to creating easy, higher comfort routes for existing and prospective cyclists.

It would be nice if we had more cycle superhighways. London is among the top cities when it comes to air pollution. I really think people should ride bicycles instead of cars as much as possible. I understand that's not always possible, but nevertheless I think it's worth it. London is a gigantic city and sometimes it's really hard to find a place to park. There are just so many cars. I'm a mover and in my area of business parking space is really important. If I can't park close to my client's house the job gets even harder. If only people used bikes instead of cars

Portland should be inspired by London’s ‘cycle superhighway’. As many of you already now, in the beggining of this year London Mayor Boris Johnson got the green light to move forward with what some are calling his “flagship policy to revolutionise cycling” in that city: a veritable “bicycle superhighway” right through Central London.

Why can’t Portland do this?

The cost of the two-way physically separated bicycle space on one of London’s major streets is $71 million. The project is part of Transport for London’s $6 billion “Road Modernization Plan” and it’s just a part of the $240 million that plan will spend on bikeways.

And this is real money and real commitment. With plans drawn up and a completion date (May 2016) and everything! It’s a far cry from our 2030 Bike Plan which — despite being widely mischaracterized by our local media as a $600 million investment — committed zero dollars to the projects within it and contains no real blueprint for moving forward.

I absolutely agree with Christian Reese, as people who are working in moving companies, we are out on the streets everyday. There are too many cars out there and the traffic they accumulate is going out of control! Something has to be done!
Jane,
http://manwithvanmarylebone.co.uk/