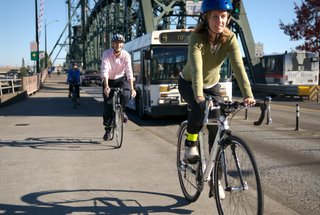 Great news for Portlanders wanting less congestion and a more active populace: the Portland Bureau of Transportation's 2010 bicycle count found an 8% increase of bicycle riders over 2009. This marks the highest bicycle ridership count since PBOT began counting bicyclists in the early 1990s.

With the aid of volunteers and machines, PBOT conducted counts at 109 locations plus the four main bicycle friendly Willamette River bridges (Broadway, Burnside, Hawthorne and Steel).

Bicycle traffic represented 14% of all traffic on these bridges. Bridge trips by bike increased by 12% while counts at the other locations rose by 7%.

it is really an awesome program for us,
<a href="https://www.sugession.com/">Best kid bike brands</a>