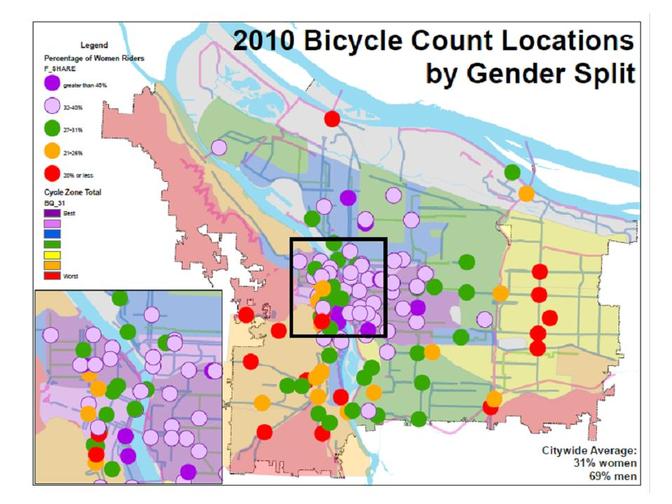 Portland's Bicycle Coordinator Roger Geller just shared three graphs created with the 2010 annual bicycle count report that we thought our readers might find interesting. We'll share one of them this afternoon.

It's something of a truism among transportation planners and bicycle advocates that you can determine the safety and functionality of your bicycle network by looking at how many women are using it. In the urban cycling meccas of Amsterdam and Copenhagen, over 50% of cyclists are women.

In Portland, we have a ways to go in making our facilities comfortable for women - and by extension, the "interested but concerned" upon whom rests meeting our lofty 2030 goal of bicycling comprising 25% of all trips. In PBOT's 2010 count, women were only 31% of cyclists, which is similar to our gender split for the past seven years.

What's reassuring is that more women are biking where we have better bicycle facilities. (The dark purple dots show locations where female cyclists represented more than 40% of all cyclists counted). These are the same neighborhoods where the City Auditor's 2009 survey found that about 30% of residents identifying the bicycle as their primary or secondary commute mode.