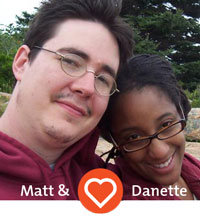 As we posted about yesterday, TriMet held a Valentine's contest that solicited stories from riders who met their sweethearts on public transit.

TriMet selected their winners at Pioneer Square yesterday. The finalists' stories are all great, but the winning story, Danette Burchill and Matt Haynes is so wonderfully Portland:

Matt and I met while waiting for the #20 on December 23, during the snowstorm of 2008.  Buses were understandably delayed and a group of 10 people had accumulated at the bus shelter on 28th and East Burnside.  “Well,” Matt said to the crowd “would anyone like to play an alphabet game while we wait? How ‘bout ‘vegetables: A-Z?’”  “Hmmm. I don’t know...” I replied. “Could we include fruits as well?” “Uh, all right, I guess.” he said and got us going.

The whole crowd enthusiastically played “Fruits and Vegetables” and had started “Rock Bands from the 70s and 80s,” when the #20 arrived. I was impressed by Matt’s boldness, playful spirit and how he brought a group of strangers together into a community, if only for a moment. Once on the bus, I thought to myself: ‘Now that’s the kind of guy I’d like to be with. Too bad I’ll never see him again.” I was wrong.  It turned out we were next door neighbors. Three weeks later, we were taking the #20 again, and Matt asked me out on our first date. We are getting married on July 9, 2011. Thanks, TriMet!

What a wonderful story Danette! Congratulations and best wishes to you and Matt.