According to the Gallup-Heathways Well-Being Index, you can seriously benefit from finding new ways to commute. 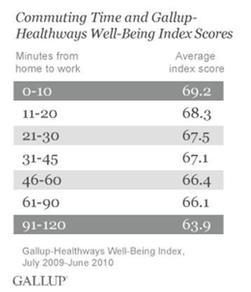 Gallup's survey of nearly 180,000 U.S. commuters found that longer commutes correlated negatively with people's physical and emotional health. Respondents who drove further to work reported significantly higher levels of worry than their short-commute counterparts and they also reported more back and neck pain.

For long commutes, telecommuting or vanpooling are great ways to cut down on costs and stress while opening up time to spend sleeping, working or relaxing. See the Metro Vanpool's list of vanpools in the Portland region.