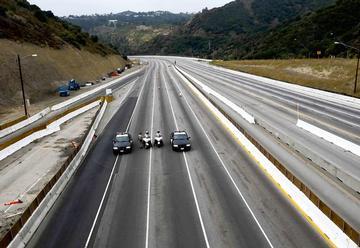 The thought of closing a large freeway section in the city outside of Detroit most identified with the automobile culture created an understandable wave of alarm. The event transfixed the media for weeks, hawkers began selling "Carmaggedon" t-shirts and government agencies worked overtime to deal with the impending gridlock, urging those people to limit their trips, use transit, carpool or bike.

And then the freeway closed and there wasn't gridlock.

First of all, there was a lot of information educating people not to drive if they didn't have to. Secondly, it happened on the weekend, when many people have more latitude on deciding whether to travel or not.

What many transportation professionals (especially those in the transportation demand management world) would also point to is the theory of induced travel demand. Economists use is this term to explain the theory that if you give people more opportunities to drive - usually in the form of less congestion from highway expansions (such as the one that is temporarily closing sections of I-405) - they will drive more (which eventually leads back to the congestion that the highway expansion was trying to solve).

Conversely, it you make driving more difficult, whether that be through congestion, gas prices or tolls, some will drive less, reducing congestion.

You will hear some therefore say that "congestion is our friend" because it encourages people to switch to more efficient forms of transportation, whether that be trip chaining, carpooling, riding the bus or biking or walking. Others would say that congestion is an anathema to a strong economy and relieving it should be a sole goal of transportation projects.  Most people are likely somewhere in between.

Whether you believe government should focus on road expansion or increasing the cost of driving to relieve congestion, when you choose to carpool, ride transit, bike or walk you reduce congestion and save money.

Portland is heralded for its large percentage of "choice" transit riders - those who own a car but choose to take the bus or train. Can you imagine the congestion in Portland if the thousands of daily choice transit decided to drive to work? Or if half of the 6% of Portlanders who bike to work drove? Now that's carmageddon.