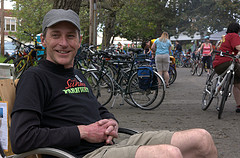 Last Sunday I caught a ride with Linda Ginenthal, Project Manager for Portland Sunday Parkways, down to Eugene to check out their first try at a ciclovía-style event, Sunday Streets.

Don’t plan for Eugene’s weather by looking out the door in Portland:  I packed gear to be cold and wet; Eugene was warm, dry and lovely.

Follow the bikes:  We had a map of the route with us but little experience navigating Eugene’s streets.  Luckily, there were clues on where to go, and they all had two wheels.

People are friendly there:  We had a chance to chat with several of the folks involved, including Rob Inerfeld from the Eugene Transportation Planning Dept., the two police officers working the event (just two!), some flaggers watching major intersections and volunteers along the way.  Needless to say, they were all very excited for the big day.  The streets of the 3-mile route were closed to motor vehicles from noon to 4 pm.  Bands, dj’s, dance lessons and activities were programmed at parks along the route.  What a great concept!

Eugene has lots of crazy bikes:  Not only do they have tall bikes like Portland (including a BBQ bike and lawnmower bike) but they have an enourmous number of “freaky-normal bikes” – I saw a Nijlands-style cargo trike, a recumbent tandem pulling a Blue Sky trailer, several Xtracycle-style longtails (including one with a 16-inch wheel “dinghy”), a Dutch Omafiets with requisite huge reed basket on front, a velomobile, a pair of Bike Fridays with titanium-beam softride seat tubes, and several examples of a bike that’s a cross between an ellipitcal step-machine and a razor scooter.  With all this variety Linda and I still got props for her borrowed Bike Friday Tikit and my Batavus (signed by Janette Sadik-Khan).

Eugene has cute neighborhoods:  Although much of the route traversed a park (Skinner Butte) and a main street (5th Ave) there was a “lollipop” loop that showed off quiet leafy streets and quirky bits of decoration. It even included the Ninkasi Brewery, but no stop for us - we didn’t want to bike impaired.

Eugenians know how to party:  All along the route folks were having fun, especially this group of salsa dancers who specialize in Rueda de Casino.  (You can check them out at http://www.eugenecasineros.com/ – there’s a group in Portland who do this too.)  I asked if they had arranged with Sunday Streets organizers and they said “no” a bit bashfully.  No need to be shy, though!  Just like Sunday Parkways, Eugene’s organizers were happy to have spontaneous dancing in the streets.

So this is why people make a day of it!:  Linda confessed that this was the first Ciclovía-style event she had been to that she hadn’t planned herself.  Even though the route was much shorter than Portland’s Sunday Parkways (3 miles vs. 6 – 8 miles) we spent all 4 hours of car-free bliss enjoying ourselves.  Of course, this included a lot of stops to take pictures, talk with folks, see some music, have lunch at a bakery along the route, buy cookies from a charter-school bake sale, and bask in the sunny weather.

I’m looking forward to future Sunday Streets in Eugene – but until then, I’m excited for this weekend’s Northeast Portland Sunday Parkways!