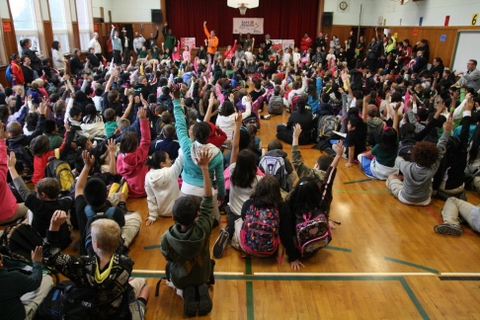 “Portland has worked harder than any other city in the United States to make our streets safer and easier for students to walk and bike, and it’s great to see so many students and families benefit,” Miller said.

“Unlike most of the country, over 40 percent of the trips to Portland elementary schools are made on foot or bike. That’s better than when we started Safe Routes to School, and much better than the national average of 12 percent,” Mayor Sam Adams said. “But there’s more to do, especially in East Portland. Which is why I dedicated $8 million to building sidewalks in East Portland. And I’m pleased to announce that completing sidewalks on the south side of Prescott Street is part of that plan.”

"In the 1960's over 40 percent of children across the US walked or biked to school in contrast to less than 15 percent of children who do so today,” said Kaiser Permanente pediatrician and childhood obesity expert Dr. Philip Wu. “On the other hand, in Portland our children are ahead of the game. Forty percent of their trips to school are active ones. By walking or biking, they are helping to ensure their good health."

Some of the credit for the increased rate that students walk and bike to school locally is due to the Portland Bureau of Transportation’s Safe Routes to School program, now in its seventh year of operation. Prescott Elementary, in Parkrose School District, was one of the first schools to join Safe Routes and has had remarkable success with the program. “Safe Routes to School provides significant benefits for Parkrose students and families,” said Parkrose Superintendent Karen Gray. “We’re proud of the fact that thanks to our partnership, every Parkrose student enters middle school having learned how to safely cross the street and navigate their neighborhood on bike.”